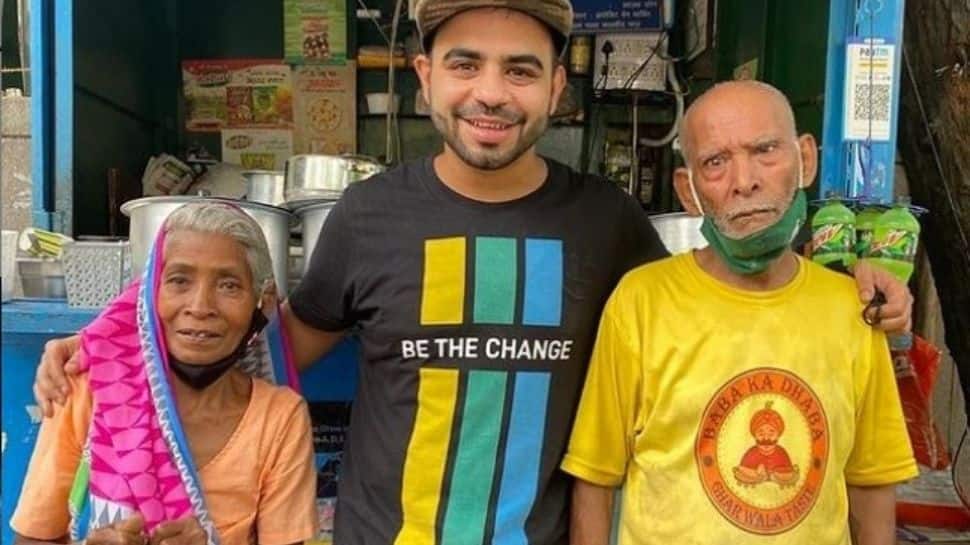 New Delhi: Baba Ka Dhaba owner Kanta Prasad, recently apologised to YouTuber Gaurav Wasan for his ‘mistake’ that led to a belief that the blogger behind his fame was a ‘thief’.

And now, it seems that the kind-hearted blogger has forgiven the elderly couple for their mistake as he was seen with the couple at their old eatery at Delhi’s Malviya Nagar on Monday, June 14.

In the picture, the trio can be seen standing outside Baba’s eatery and can be seen smiling for the shutterbugs. The catchiest thing in the whole picture was Wasan’s t-shirt which had a slogan, “Be The Change” on it.

Fans who supported Wasan throughout his difficult times, appreciated him for his kind gesture and lauded him for being such a great example to mankind.

For the unversed, Baba Ka Dhaba owner Kanta Prasad recently returned to his old stall after his restaurant incurred huge losses. The octogenarian put to rest the controversy with YouTuber Gaurav Wassan by rendering an apology.

The dhaba owner, in an attempt to clear the air about the allegations, apologised to Wasan in a video that has been seen doing the rounds across social media platforms.

Last year, the story of the dhaba owner had gone viral after food blogger Gaurav Wasan visited Baba Ka Dhaba and posted a clip of it on his Instagram account. In the short video, Kanta Prasad broke down in tears as he narrated his plight of the difficulties that he faced while running the eatery in the wake of the coronavirus pandemic.

Money Heist 5 trailer out: The Professor and his gang get ready for final battle!

Mukul - 15 July 2021
New Delhi: A few days after the sudden demise of her husband and former filmmaker Raj Kaushal, Mandira Bedi reminisced about the 25 years...
Go to mobile version