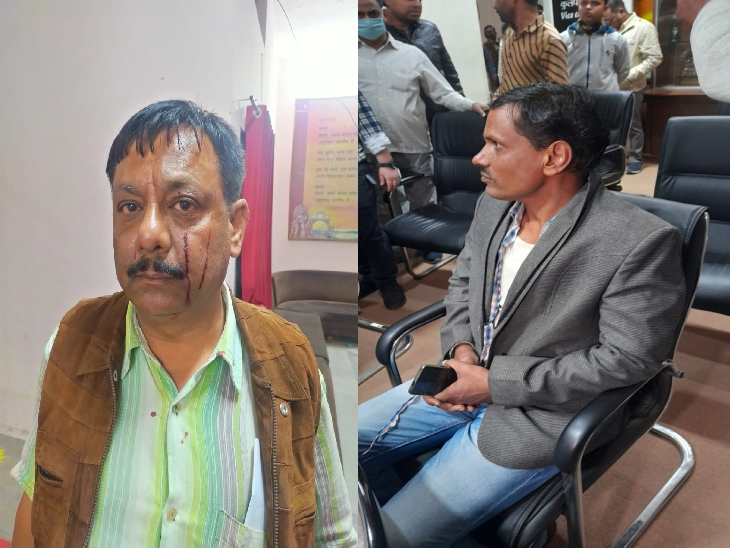 After the beating, Professor Kamran’s face bleeds and HOD Dr. DD Bedia sits on the chair

The HOD of MBA and the former HOD at Vikram University, Ujjain, kicked off fiercely on Friday evening. Both hit each other so much that it bled. Both the professors have been rebuked by the Vice Chancellor and warned not to quarrel again in future. Higher Education Minister Dr. Mohan Yadav also considered it to be serious indiscipline. Said, will take action after investigating the matter.

Actually, Kamran Sultan, the former head of the MBA department, wants to study LLM from the university itself. On this the current HOD Dr. DD Bedia does not want Prof. Kamran LL.M. There is often an argument between the two about this. This information is available to all people associated with the university. He has also raised objections to the Registrar UN Shukla several times over Prof Kamran’s LLM. At 6 pm on Friday evening, the two professors clashed in the room of the first Registrar in the same dispute. Both used abusive words for each other. As soon as the registrant came out of the room, a scuffle ensued between the two. In it, Bedia’s clothes were torn while Kamran’s face bled. The university professor, staff and students intervened to calm the matter.

Professor Dr. DD Bedia told Kamran tore my clothes. Nail to throat. I have also conveyed to the Vice Chancellor. Here, Professor Kamran says that Dr. Bedia first hit me against the wall. Nails attacked the face and cheeks. Knowing that I am a Divyang. They did not listen to me.

The Vice Chancellor of Vikram University has taken the matter seriously. Calling both of them to their room and giving strict instruction that if such mistake is made again in future, disciplinary action will be taken against both of them. Both professors have given written assurances not to quarrel again in the future.

Resignation of Uddhav’s minister: Forest minister Sanjay Rathod, who was engulfed in controversies over the suicide of Tiktok star, stepped down, saying – Opposition...

Congress and Left rally in Bengal: Adhir Ranjan Chaudhary said – Our alliance with secular forces will defeat TMC and BJP