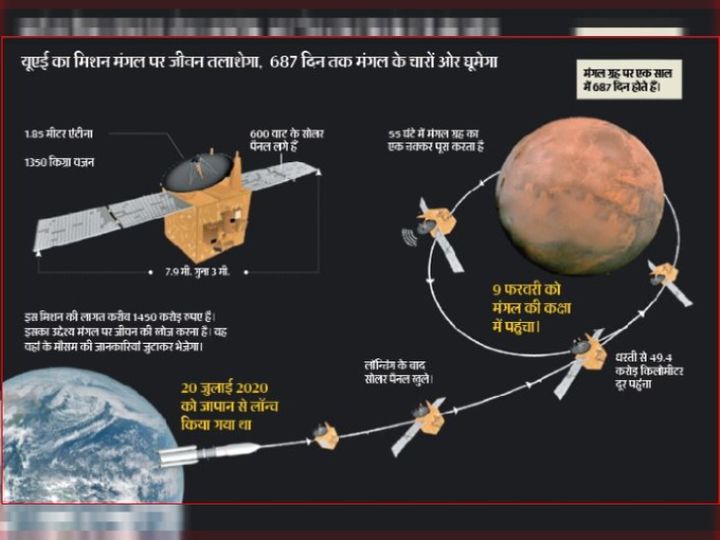 The first unmanned Mars mission of the United Arab Emirates (UAE) ‘Hope Probe’ reached the orbit of Mars after traveling 49.4 million km after 7 months on Tuesday. The UAE also set several records as the mission was successful. As such, he took his spacecraft to the orbit of Mars in the first attempt. Became the first Muslim country, whose MARS mission was successful.

It also became the 5th country in the world to reach the orbit of Mars. Before this, only America, Soviet Union, Europe and India have reached the orbit of Mars. According to the space agency of the UAE, the Hope vehicle is traveling at a speed of 1.20 lakh kmph.

Danger – Chance to get away from Mars and be destroyed

UAE scientists said that if the speed of Hope accelerates, it will move away from Mars. If Hope slows down, it can perish on Mars.

Competition – Today China and 18 will reach the US ship

On Thursday, China’s Tianmen-1 of the UAE and the US spacecraft will reach Mars on February 18. Scientists believe that the arrival of three spacecraft to Mars in a month is unexpected.

US and China ships will also reach within 10 days

58 missions have been sent to Mars in the last 61 years. The Soviet Union started on 10 October 1960, but the US succeeded. So far, the highest number of missions on Mars has been sent by the US to 29, the Soviet Union / Russia at number 22 and the EU has sent 4 missions at number three. India, Japan, China and UAE have sent one mission each.

Mission to be sent to 5 countries in 4 years; Among them also Mangalyaan-2 of India

In the next four years, five countries are going to send missions to Mars. First, the EU and Russia will jointly send a landmark-lander Rover in 2022. This year, Japan will send an orbiter and lander. In 2023, America’s Psychi vehicle will depart from Mars. India will send Mangalyaan-2 in 2024. It will also have an orbiter and possibly a lander.