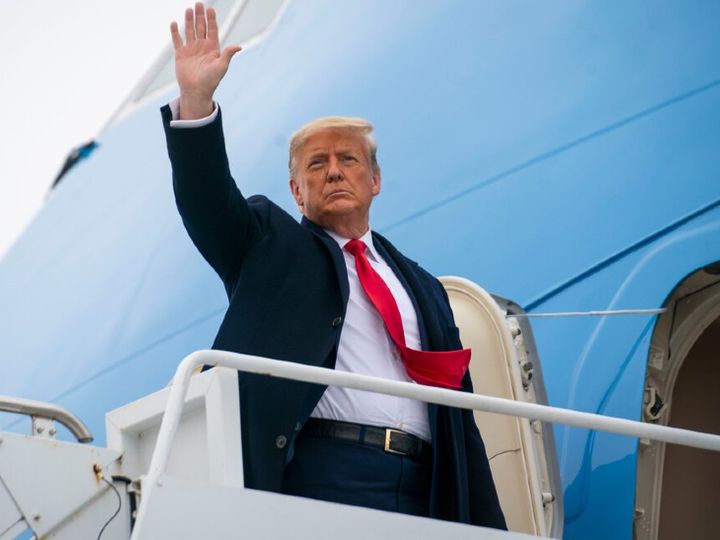 The photo is from 20 January. Trump then left Florida for the last time at his home from Air Force One. Some media reports have stated that they may contest the next election as well.

Donald Trump is currently silent on his chances of contesting the next presidential election. Trump does not want to disclose about this. In an interview on Thursday, Trump was asked questions on the 2024 presidential election. On this, he said – It is too early to say anything about this. But, it is definitely that despite the impeachment, my popularity has increased.

I guess that’s it
There are speculations in the American media and in the Republican Party that even in 2024, Trump will challenge the Democrat candidate. There are two reasons for this. First, there is no Trump-like leader in the Republican Party. Second, a section believes that Trump loses by a close margin and that he made tough decisions in the interests of America.

First interview after impeachment
Violence took place inside and outside the US Parliament on 6 January. Trump was impeached on charges of inciting the mob. They were found innocent in this. Trump first interacted with a TV channel after being found innocent. However, he did not give a direct answer to the question of contesting elections in 2024. Said – It is too early to say anything. But, many surveys have come up. I have received and am getting tremendous support. Remember I am the person against whom impeachment was conducted and despite this my support is increasing.

Unhappy with some politicians
During the impeachment, some Republican party leaders made speeches and votes in opposition to Trump. Trump is angry with them. He also expressed his displeasure clearly. Said- Republicans are soft-hearted. Take the example of Mitch McDonald.

Trump also taunted Biden. Said- The new president talks a lot, but he has not been able to do anything so far in the distribution of the Kovid-19 vaccine. There are two things – either they do not tell the truth or they are mentally weak. Social media platforms have banned Trump. In response to a question about this, Trump said – I will return in another way.

Impeachment Against Trump: 6 Republican Senators Also With Biden’s Party, Despite...