The accident happened at 3:45 am between Reti and Daharki railway station near Ghotki. Still many passengers are being rescued by cutting the badly damaged bogies with gas cutters to rescue the stranded passengers.

There has been a major train accident in Pakistan on Monday morning. Two trains collided in Daharki area of ​​Sindh. About 30 people are reported to have died in the accident and more than 50 people are said to be injured. According to the information, the collision took place between Millat Express and Sir Syed Express. Still many people are trapped in the bogies. In such a situation, the death toll is expected to increase further. 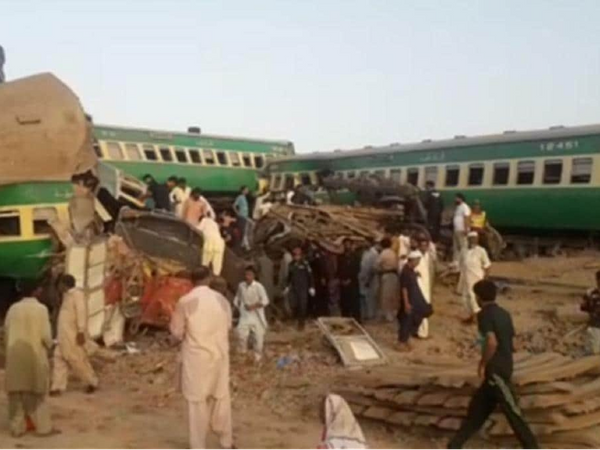 Eight bogies of Millat Express derailed uncontrollably and fell on the other track.

Accident happened near Ghotki
The accident happened at 3:45 am between Reti and Daharki railway station near Ghotki. According to the information, Millat Express was going from Karachi to Sargodha and Sir Syed Express was going from Rawalpindi to Karachi. According to Pakistani media, the bogies of the Millat Express went out of control and fell on the second track. The Sir Syed Express coming from the opposite collided with him. Due to this there was a lot of damage to the bogies.

The rescue team did not reach the spot for four hours.
The officers did not reach the spot for four hours after the accident. The rescue team that arrived late has started evacuating the stranded passengers. Still many passengers are being rescued by cutting the badly damaged bogies with gas cutters to rescue the stranded passengers. They are being taken to the hospital by tractor-trolley arrived from nearby villages. Due to the accident, the movement of most of the vehicles on this route has been affected.

Emergency declared in nearby hospital
Ghotki Deputy Commissioner Osman Abdullah said that 13 to 14 bogies of both the trains have derailed. Of these, 6 to 8 have been completely ruined. That’s why people are finding it difficult to rescue. Arrangements have been made to take the injured to the hospital after the accident. Emergency has been declared in Ghotki, Daharki, Obero and Mirpur Mathelo hospitals and doctors and paramedical staff have been called on duty.

The accident happened in March too
Earlier in March, the Karachi Express train had become a victim of an accident. The train had left Lahore and eight of its coaches derailed in Sukkur province. One person was killed in the accident, while around 40 passengers were injured.

Under an exclusive contract with The New York Times: These mothers find a new path through the challenges faced during the pandemic; Changed...

Under special contract with The Economist: Italy’s Lipstick Valley is back in the limelight, after the recession of the pandemic, cosmetics sales are back...