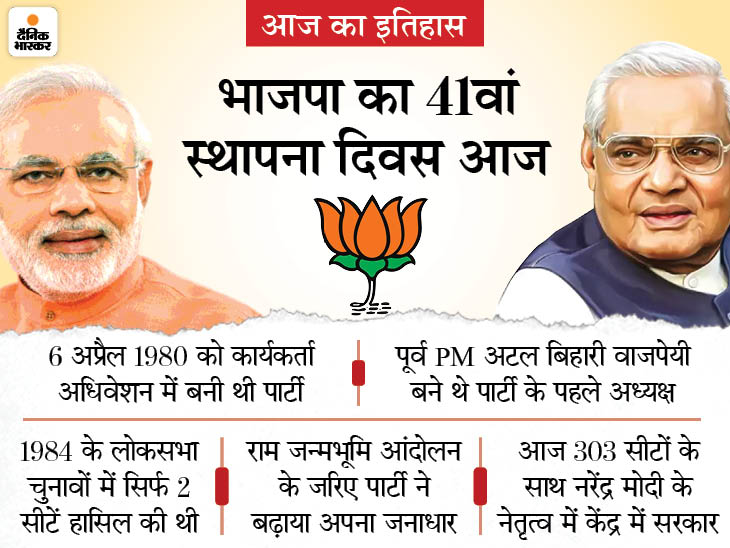 In the politics of India, the Bharatiya Janata Party (BJP) is the subject of study for students of politics around the world. Today is the 41st foundation day of the party and in four decades the party has come a long way from 2 seats in the Lok Sabha to 303 seats. From the Atal-Advani duo to the Modi-Shah duo, the party has achieved new achievements in every decade. The Ram Janmabhoomi movement also helped him, which resulted in the Bhoomipujan of the temple at the Ram Janmabhoomi in Ayodhya last year.

Even though the BJP was founded on 6 April 1980, its history is associated with the Bharatiya Jana Sangh. Dr. Shyamaprasad Mukherjee resigned from the Jawaharlal Nehru cabinet after India remained silent on the alleged atrocities on Hindu minorities in Pakistan and Bangladesh and founded the Bharatiya Jana Sangh on 21 October 1951. The Jana Sangh, under the leadership of Dr. Mukherjee, opposed giving privileges to Kashmir. He was jailed, where he died under suspicious circumstances. In 1967, under the leadership of Bharatiya Jana Sangh and Deendayal Upadhyaya, Congress’s monopoly was broken in many states and Congress started losing in states. In 1977, when Indira Gandhi decided to hold elections after ending the Emergency, all the anti-Congress parties came together and formed the ‘Janata Party’ at the call of Jayaprakash Narayan. The Bharatiya Jana Sangh merged with the Janata Party on 1 May 1977.

The Janata Party experiment did not last long. Mutual competition also increased. It was said that people belonging to Rashtriya Swayamsevak Sangh will not remain in the Janata Party. Then on 6 April 1980, the Bharatiya Janata Party was formed as a new organization. Atal Bihari Vajpayee became the first president. There was a sympathy wave in favor of the Congress because of the assassination of Indira Gandhi in the 1984 Lok Sabha elections and the BJP could win only two seats. In 1989, the BJP moved ahead due to Bofors and other issues and then had 85 seats. This year, the party supported the Ram Janmabhoomi movement. LK Advani started Ram Rath Yatra from Somnath. After this, the support received by the party continued to grow. Advani was arrested in Bihar on the orders of the then Chief Minister Lalu Prasad Yadav. In 1991, the party’s seats increased to 120 in the agitation. In 1993, BJP votes also increased in Uttar Pradesh, Delhi, Rajasthan, Himachal and Madhya Pradesh. In 1995, lotus feeding also occurred in states like Andhra, Karnataka, Bihar, Odisha, Goa, Gujarat and Maharashtra. 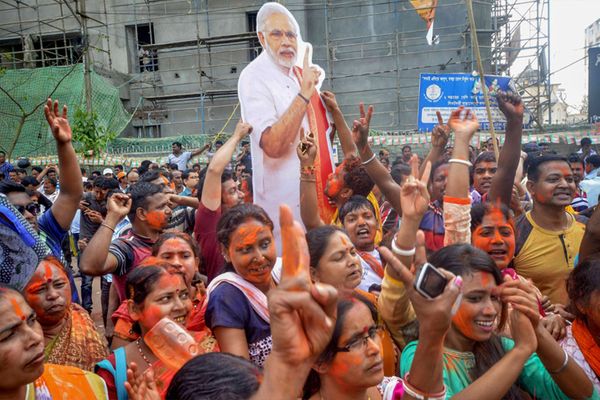 In 1996, the BJP won 161 seats and emerged as the single largest party in the Lok Sabha. Atal Bihari Vajpayee became the Prime Minister, but the government fell within 13 days due to lack of majority. In the 1998 mid-term elections, the BJP formed the NDA with allies and came to power. In 1999, AIADMK withdrew support and the government fell. In October-1999, the NDA won 303 seats and won a clear majority. The BJP became the single largest party by winning 183 seats. In 2004, under the leadership of Vajpayee, the slogan of India Shining was given, but it did not run and it got 186 seats as compared to 222 of the Congress. In 2009, BJP seats were reduced to 116. In 2014, the BJP won 282 seats under the leadership of Narendra Modi and the NDA won 336 seats out of 543. Modi became the 15th Prime Minister of the country on 26 May 2014. For the first time after 1984, a party got a majority in the Lok Sabha. After this, BJP won 303 seats in 2019 and created history.

On 6 April 2010, CRPF jawans returning from a search operation in Dantewada, Chhattisgarh were ambushed by Naxalites sitting in ambush. The magnitude of the attack can be gauged from the fact that the Naxalites fired more than 3000 rounds. 76 CRPF personnel were killed in this attack. Around 5 am, the 62nd battalion of CRPF and about 120 personnel of the state police were returning to the camp after a 3-day search operation. The jawans were passing through the forest of Mukarna in Dantewada, when the Naxalites blasted the IED and blew up the vehicle of the jawans. About 1000 Naxalites hiding in the vicinity started firing before the casualties of the blast could make any sense. The encounter continued between the jawans and the Naxalites for about 7 hours. 9 Naxalites were also killed in retaliation.

In the history of the country and the world, April 6 is also remembered because of these events-

The healthy are the rich: those who are healthy make 28%...

Mukul - 7 April 2021
Hindi newsNationalThose Who Are Healthy Make 28% More Wealth; 5.5 Crores Below Poverty Line Due To Spending On Indian DiseasesTroubled with Ads? ...
Go to mobile version