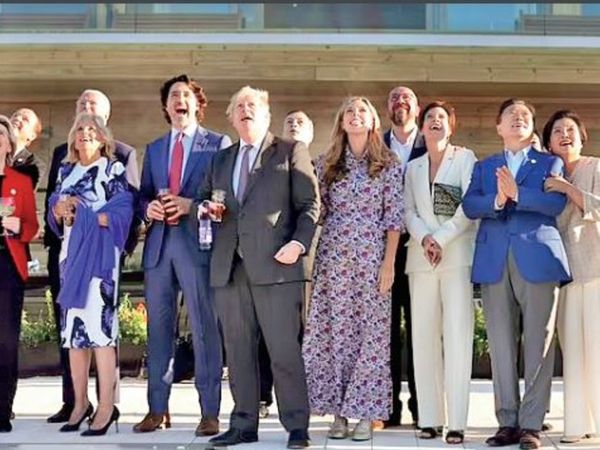 Hum Saath Saath Hain – The leaders of the G-7 countries watch the acrobatic team of the Royal Air Force in the UK.

China is shocked by the three-day G-7 summit held in Cornwall, England. China is seeing this conference as factionalism against itself. That is why he threatened the G-7 countries on Sunday and said that that era is over long ago, when a handful of countries used to decide the fate of the world. A spokesman for the Chinese Embassy in London said- ‘The time is long gone, when small groups of countries used to take global decisions.

We always believe that whether a country is big or small, strong or weak, poor or rich, all are equal. They should be decided on the issues related to the world only after consultation with all the countries. In fact, on the second day of the conference, the G-7 countries (USA, Canada, UK, Germany, Italy, France and Japan) blew a trumpet against the dragon by launching a project against China’s ambitious project ‘One Belt, One Road’ (OBOR). Have given.

On the other hand, the G-7 summit concluded on Sunday with impressive promises of providing vaccinations, large sums of money and technology to stop climate change around the world.

Aim to educate 40 million girls of the world; 4,442 crore Rs. Britain will give
Britain’s Prime Minister Boris Johnson said that the G-7 countries have set a goal of educating and reaching 40 million girls in the world. For this, G-7 leaders will do global partnership and raise funding. For this, Britain will donate 430 million pounds (about Rs 4,442 crore). He said that it is an international insult that even today some children are away from education.

Biden said in the press conference – get access to Chinese lab
China dominated the three-day summit. There was a strong stand of all the leaders including US President Joe Biden against China. Biden held a press conference after the conference ended. He said- ‘China should give access to the Wuhan lab, so that we can test better. Only then can the origin of the virus be known. Biden also spoke about the deteriorating relations with Russia.