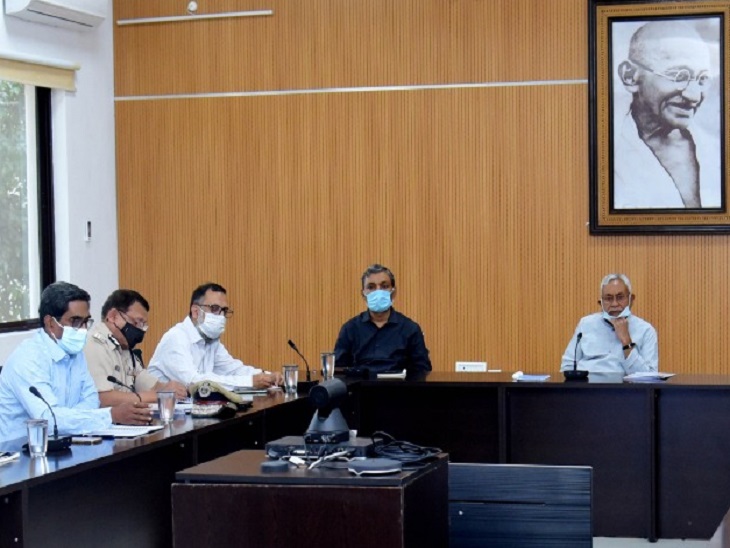 Bihar Chief Minister Nitish Kumar held a review meeting on the status of infection on Saturday.

The Bihar government has decided to keep the schools and colleges closed till 12 April. This decision was taken in the meeting of the Crisis Management Group held immediately after the review meeting of CM Nitish Kumar on Saturday. Bhaskar had told on Friday that due to the opening of schools in the growing cases of Corona Children’s guardian is upset.

Now the Bihar government itself has accepted that the situation has not improved so much that the children are sent to school. The CM in his meeting after reviewing the situation in Corona had said that the Crisis Management Group should hold its own meeting and decide on the issue of schools.

Half ride in public transport, not external in government office

The Crisis Management team has also stopped all public programs along with the closure of the Educational Institute. The number of people involved in marriage and marriage is fixed. Only 250 people will be allowed to attend the wedding and 50 people in the Shraddh.

Doctors also said – opening school right now is dangerous
The pace of spread of infection in Bihar is like September of last year. The maximum number of cases were coming here in August and the situation is being re-created the same way. In such a situation, government schools are open and private schools were to start physical classes mostly from April 5, 6, 7 for the new session.

The doctors were also frightened by this decision of the schools. On Friday, Bhaskar gave news on the trends of Corona and preparation of schools, and on Saturday, many doctors themselves came forward and said that it would be wrong to do so. It would be dangerous to open a school right now.

The second strain of Corona is dangerous for children
Due to the second wave of Corona, the situation in many states of the country remains worrisome. Cases are also increasing rapidly in Bihar. According to Dr. Sanjeev Kumar, the Kovid Nodal Officer of Patna AIIMS who has treated the most corona patients here, this decision of schools is going to increase the risk of corona. The strain that the corona has spread at this time is much more contagious than the previous strain. It is also engulfing children.

Commendable initiative of the army: Army in Kashmir changed the color...

Mukul - 16 April 2021
Hindi newsNationalArmy Changed The Color Of The Convoy's Flag In Kashmir, Greetings Messages On The Festivals Celebrated In The Valley Written On VehiclesTroubled with...
Go to mobile version