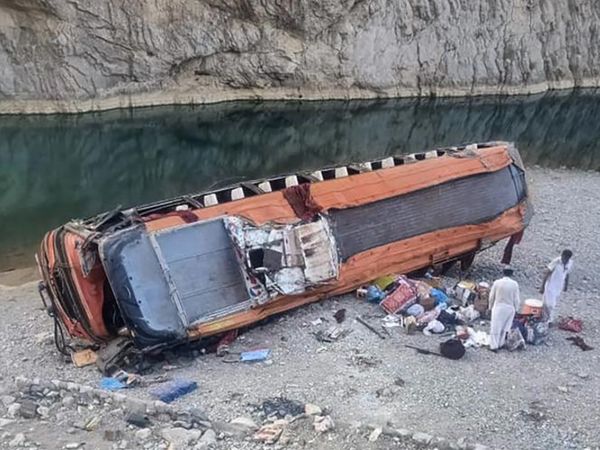 The local people rescued the passengers after the accident. So far 23 people have died.

23 people died in a road accident in Pakistan on Friday. According to media reports, the accident happened in Khujdar district of Balochistan. The bus carrying devotees here fell into a deep gorge. 18 people died on the spot, while 5 died in the hospital. The condition of 39 people is said to be critical. According to the police, the bus driver tried to make a sharp turn on the narrow road, during which he lost control of the steering and the bus fell into the ditch.

There was also a train accident in Pakistan last week. In this, 67 people died, while more than 500 people were injured. The incident happened because of the bad rail track.

Devotees were going to the dargah
According to ‘Dawn News’, the incident took place in the early hours of Friday in Khujdar district. People from Wadh region of Balochistan were going for Ziyarat at a dargah in Dadu, Sindh. Around four in the morning, the bus driver took a sharp turn and lost control. Most of the passengers were asleep at the time of the accident. Neighbors helped him by hearing his cries. However, there was also water in the ditch, so help arrived quite late.

minor injuries to staff
A bus passenger said that the bus staff was safe in the incident. The driver has suffered minor injuries. According to this passenger, he had asked the driver several times before the accident to drive the car carefully, as this route is very difficult and there are sharp turns in many places. On the other hand, the police say that the driver was driving in a dangerous manner and the music was playing too loud at the time of the accident. The investigation of the incident is underway. The death toll may rise as most of the injured are in critical condition.

Revealed from official document: 24 Pakistani women with children lodged in...