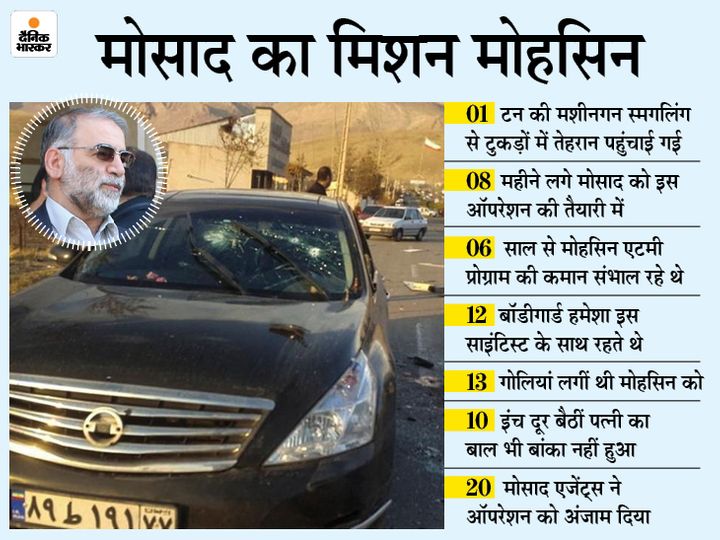 place: Tehran, the capital of Iran. Date and time: 27 November 2020, around 6 pm. 5 black vehicles pass through the High Security Zone. Suddenly there is a heavy firing on a car. In a few moments, the elderly sitting in a car rolled to one side. The convoy trains stop. At the same time, there is a blast in a pickup van located at some distance. When dust and smoke splinters, it is known that Mohsin Fakhrizadeh, Iran’s biggest nuclear scientist, has been killed.

All questions arose. Who killed Mohsin and why? An even bigger question – how was Mohsin’s murder executed. Iranian investigative agencies continued to suspect Israel and America, but their hands are still empty in the name of evidence.

Now Jewish Chronicle, a newspaper in Israel, has revealed this operation of Mossad. He has made his special report all the kingdoms, which Iran could not find out till date.

Mossad gets help from Iranian agents
Israel, America and Arab countries do not want Iran to become an atomic power. Iranian nuclear scientists have been the first to target Israel. Some were almost killed in the same manner. However, the Israeli newspaper reports that the operation was carried out by the Israeli intelligence agency Mossad. It also included some of his Iranian agents. Altogether 20 agents completed this mission.

Monitored Mohsin for 8 months
Mossad had information about every movement of Mohsin. It was raked for 8 months. All kinds of intelligence instruments were used. Mohsin took over the Atomic Program 6 years ago in 2014. However, Israel targeted him when he was about to succeed. This is the reason why Mohsin was knocking in the eyes of America, Israel and Gulf countries for a long time.

‘Grandfather of Iranian bomb’
Mohsin, 59, was called the father of the bomb. He received 13 bullets. Apart from the wife and other convoys sitting next to her, 12 bodyguards were also safe. An Iranian officer said – 62 gunmen killed Mohsin. Now this claim can only be laughed at, as he said this without proof. One reason is that the truth of the operation has been revealed from Israel itself.

How Operation: In a Nutshell
Preparation was done for 8 months. There was a team of 20 agents. A machine gun weighing one ton from Israel was transported through smuggling to agents present in Tehran. Nissan company pickup van purchased. Machine guns were fitted over it. The day and time were fixed. Mohsin’s convoy passed from there. The rest is now history.

One thing that left no evidence of the operation must be understood. Immediately after Mossad’s agents killed Mohsin, he blew up the pickup ban, which had a machine gun fitted on the roof. These agents escaped in smoke and dust and reached the safe location. The report claimed that the operation was carried out by Mossad alone. America or any other country was not involved in this.

How important was Mohsin
Defense Advisor Jacob Nagel’s statement from Israel Prime Minister Benjamin Netanyahu shows Mohsin’s importance to Iran. Nagel says – Mossad had strong evidence that Mohsin was close to making many atomic bombs that could be very deadly. Five cities like Hiroshima could be destroyed by one bomb. We felt that they had completed their share of life.

Meeting: Name of dependents recommended in the meeting for appointment on...