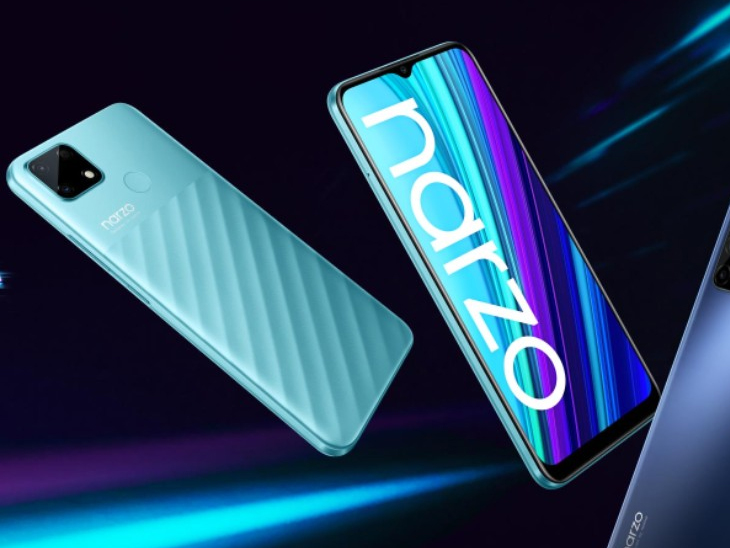 Realme, which sells powerful smartphones in India at an affordable price, is going to launch new products on June 24. Realme India CEO Madhav Seth has confirmed that the company will also launch Realme TV along with two new Realme smartphones. These will be the Narzo 30 and Narzo 30 5G models of the Narzo series. At the same time, the TV will come in 32 inch display size.

The launching event in India will start on June 24 at 12:30 PM. It is clear from the new teaser that the Realme Narzo 30 and Realme Narzo 30 5G smartphones will come with punch-hole displays. Narzo 30 Pro and Narzo 30A of the Narzo series are already present in India.

realme narzo smartphone price
These smartphones have already been launched in the Europe market. The price of 6GB RAM and 128GB variant of Realme Narzo 30 in Malaysia is MYR 799 (approximately Rs 14,100). Whereas in Europe, the price of 4GB RAM and 128GB storage variant of Reality Narzo 30 5G is 219 Euro (approximately Rs 19,400). That is, the company will get a new 5G smartphone in less than 20 thousand rupees.

Specification of realme narzo 30
According to the model launched outside the country, it will get a 6.5-inch Full HD + (1080×2400 pixels) display, which has a refresh rate of 90Hz. MediaTek Helio G95 octa-core chipset has been given for speed and multitasking. It will get 128GB of onboard storage. The phone is equipped with 3 rear cameras, in which 2 megapixel macro and 2 megapixel black and white camera sensor has been given with 48 megapixel primary camera. There will be a 16 megapixel front camera for selfie.

Specifications of Reality Narzo 30 5G
According to the European model, it will get a 6.5-inch Full HD + (1,080×2,400 pixels) display, which has a refresh rate of 90Hz. The phone is powered by MediaTek Dimensity 700 processor with 4GB of RAM and 128GB of onboard storage. This smartphone is also equipped with 3 rear cameras. In which 48 megapixel primary camera sensor with 2 megapixel monogram camera and 2 megapixel sensor has been given. There is a 16-megapixel front camera for selfie.

Good news for Maruti Suzuki customers: Finance will be able to...