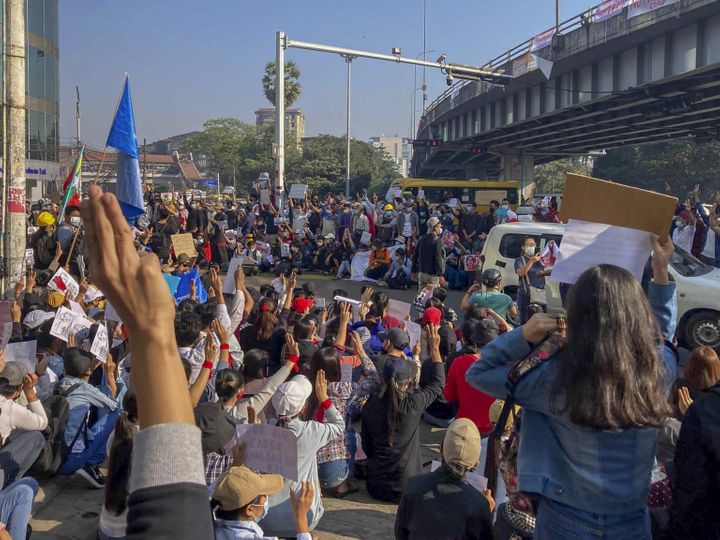 People gathered at different places in Myanmar’s Yangon on Tuesday morning to protest against the military coup. Government employees also participated in it.

After the February 1 coup in Myanmar, the public has come out on the streets with full force. The army has imposed curfew in most cities and towns of the country, but in front of the people’s enthusiasm, it is silently watching the spectacle. Since Tuesday morning, people took to the streets in Yangon and other cities. Some protesters said – We cannot see democracy ending before our eyes. Democracy is back, nobody cares about curfew.

Workers did not reach hospitals and offices
After the coup on 1 February, the army had on 5 February banned the gathering or rally of people in any part of the country. After this, the opposition is getting stronger. According to a report by ‘The Guardian’, on Tuesday morning people came out on the streets and shouted slogans against the military government. During this time the soldiers kept standing silently. Employees in hospitals, schools and government offices did not arrive.

Thousands of people reached Yangon’s historic Sule Pagoda around dawn. Meanwhile news spread that the army could use force against these people. But, seeing the number of people and their courage, the soldiers stood quietly. 37-year-old Vin Min said- We know that the army wants to suppress our voice, but this time we are not going to back down.

Dictatorship will not work
Banners were taken in hand by the protesters on Tuesday. It was written on these – Our leader Aung San Suu Kyi should be released immediately. Now dictatorship will not be tolerated in the country. Democracy is the right of the people and it is the people who have honored the army.

School teacher Thein Win said- If the army thinks that people will hide in the house because of this oppression, then it is a misunderstanding. They should understand that now people have come on the road and the army must restore democratic government. Some people performing on the road here also played vehicle horns. Criticized the ban on the Internet.

Modi and Biden also discussed Myanmar
A phone conversation between Prime Minister Modi and US President Joe Biden on Monday night at 11 am. According to the news agency, the coup and subsequent situation in Myanmar were also discussed. After the coup, Biden warned that the US might impose sanctions there. However, he has not taken any strict steps till now.

Nitish - 4 January 2021
Fed up with Ads? Install Dainik Bhaskar app for news without adsRiyadh5 days agoCopy linkSaudi Arabia is making changes to the law to...
Go to mobile version