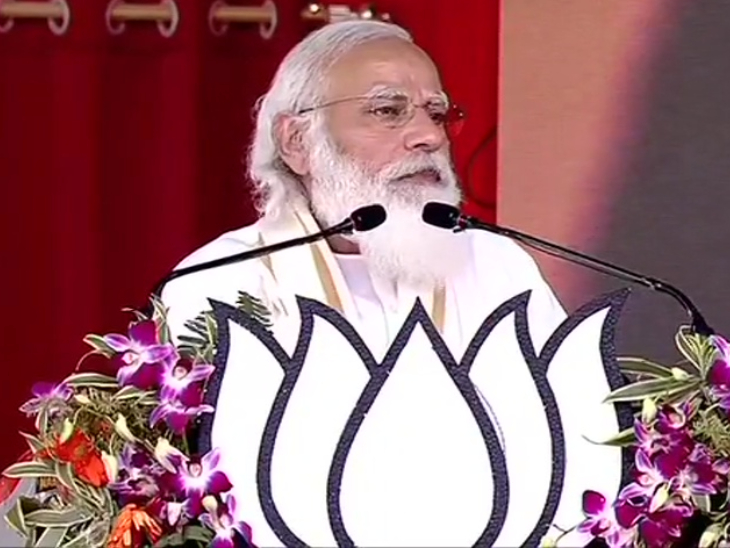 Prime Minister Narendra Modi reached West Bengal on Monday for the third time in the month. In Hooghly, he said that now West Bengal has made up its mind for poribartan (change). Taunting the TMC, he said that the talk of mother, mother and man, has become a wall in front of the development of Bengal. West Bengal Chief Minister Mamata Banerjee stayed away from the event.

Modi said, ‘This enthusiasm of you people, energy is sending a very big message from Kolkata to Delhi. Now West Bengal has made up its mind for poribartan (change). Today, West Bengal is taking big steps to prove its resolve for this development. Many congratulations for the bright future of Bengal, for the foundation and inauguration of the rail and metro connectivity project in West Bengal.

Previous governments did not develop in Bengal
All the countries in the world who have come out of poverty or managed to eradicate poverty, or become developed, all have one thing in common. These countries built a large number of infrastructure at the right time. Modern highways, railways, airways helped these countries to take them forward. In a way it became a very big reason for change. We should have done the same thing decades ago, but it did not happen.

Freight Corridor will benefit the people of Bengal
Modi said that now we do not have to delay. Don’t lose a single moment. There is now an unprecedented emphasis on infrastructure. Every aspect of development has a basic need. In the past year, the focus was on all types of connectivity like highway railway, airway, waterway. Thousands of crores of rupees were invested in Bengal. The work of widening and electrification of railway lines is being done at a rapid pace. New doors of possibilities are opening in Bengal regarding railways. The major benefit of the Eastern Freight Corridor is going to be in Bengal. A part of it has also been commissioned. Very soon the entire corridor will open.

Farmers of Bengal got a market by Kisan Rail
The farmers of Bengal are getting the benefit of Special Farmers Rail. Recently the 100th Kisan Rail was run from Maharashtra to Bengal. This has given direct access to the big markets of the country including Mumbai, Pune to the farmers associated with fruits, milk and fish. Today is a big day for millions of Howrah-Hooghly students and workers. Thousands of passengers are going to be facilitated by the extension of the metro to Dakshineswar. Now fast public transport has been found to travel to Kolkata.

Governments did injustice to Bengal’s pride
In Hooghly, Modi said that this entire region, including Chandranagar, is the island of India’s independence, culture and knowledge. Countless great people including Maharishi Aurobindo, Ras Bihari Bose, belong to this earth. I am surprised that all the governments that have been here for so many years have left this historic area on their own. The heritage of this place was allowed to suffer.

Modi said, ‘I have been told that Vande Mataram Bhavan where Bankim Chandra lived for 5 years is in a very bad condition. Here he churned on the creation of Vande Mataram, who gave new life in the freedom struggle. It gave a new strength to the revolutionaries. Vande Mataram, these two words filled the country living in slavery with new energy. It is a great injustice to the pride of Bengal to keep the place connected to it in a bad condition.

Patriotism left behind in appeasement politics
There is a lot of politics behind ignoring the pride of Bengal. This politics emphasizes appeasement instead of patriotism rather than vote bank, development of all. This politics prevents the worship of Mother Durga in Bengal. The people of Bengal will not forgive those who insult culture for vote bank politics. Today I assure the people of Bengal that when the BJP government is formed in Bengal, every Bengalis will be able to glorify their culture with full force.

BJP will work to make Sonar Bangla
Modi said that BJP will work for the creation of Sonar Bangla. The culture here will become stronger day by day. A Bengal where faith, spirituality will be respected, where everyone will develop. Nobody will be appeased. One who will be free from negotiation, will have employment and self-employment. Before independence Bengal was far ahead of other states of the country. Those who ruled Bengal delivered it in this condition today. People talking about Maa, Mati, Manush stood as a wall in front of Vikas. The central government sends the money of the schemes directly to the account. The money of the poor in Bengal does not reach the poor without the tactic of TMC leaders.

Government of Bengal took away the rights of farmer families
Modi said that the rights of lakhs of farmer families of Bengal were taken away by the people sitting in the government here. Millions of families are also deprived of the benefits of Ayushman Bharat. This mission is more important for Bengal because only 9 lakh out of more than one and a quarter to twenty million rural houses have tap water facility. After the campaign started in the country, water connections have been given to more than 3 crore households. With the speed at which the government is working here, it is not known how many years will pass in piping water to every house in West Bengal.

Let me give one more example of how serious the TMC government is to deliver water to the homes of the poor. The Government of India gave more than 1758 crores to TMC Government. Out of this, only 609 crore rupees were spent. The remaining 1100 crore government has sat under pressure. This shows that the TMC government cares little about the poor and the sisters and daughters of Bengal.

Bengal’s youth live in hope of change
Modi said that it is important to feed lotus in Bengal so that the situation in West Bengal can change. Today’s young man is living in hope of this. Hooghly is an example of this. In what condition has the chaos caused West Bengal. Hooghly was the hub of industry. There was a jute industry on both sides. There were large factories. It used to export from here. You know what its status today.

Mothers and sisters used to sing in the folklore of eastern India that the householders went to Calcutta to earn. It was expected that when he returns, what will he bring from Calcutta. New things will come to our house. Such songs were sung from Orissa to Assam outside Bengal. This was the fame at that time. Now many people have to go out for work. You have decided to change this situation. Steps will be taken in this direction as soon as a new government is formed.

Jute mills left in Bengal
Modi alleged that the government of Bengal had left the jute mills on their side. Ever since the BJP government came to the center, jute farmers have been worried. Now jute is also being used in wheat-sugar packing. The situation of potato farmers of Hooghly is also not hidden from anyone. Who is robbing the potato and paddy farmers here? You know more. Food processing factories will not be built here, till then neither the farmers nor my laborers will be interested.

Cut culture spoils investment climate in Bengal
Modi said that there is no lack of enthusiasm for investment in Bengal. The problem is that the environment created by the government, the culture of cut, the syndicate, the investment environment has deteriorated. Wherever Bengal’s son and daughter are, he wants to do something for Bengal. If you want to rent a building in today’s Bengal, then it is also cut. Cannot even take building on rent without permission of Syndicate. This perception has to change.

Bringing Asol Poribartan to Bengal
Modi said that Bengal has to bring Aasol Poribartan (real change), feed the lotus. Development of Bengal is not possible as long as the Syndicate reigns. Tollabaz will remain the rule. The cut culture will remain in Bengal. The administration will give shelter to the goons. The rule of law will not be established. This is not possible until a government hearing the common people is formed here.

Mamta’s rally after two days
This field has its own history. This area once belonged to Dunlop, Asia’s largest tire factory, but the Dunlop factory has been closed for years. In such a situation, people here are expecting some announcements from Modi. Two days after the Prime Minister’s rally, Chief Minister Mamata Banerjee’s public meeting will also be held in this ground.

These projects get green signal in Bengal

Battle of idioms in BJP-Congress: Rahul wrote 3 idioms to surround the Modi government on the raids of IT in Bollywood, BJP responded in...

Notice to the Center on Corona Vaccination: Delhi High Court said – instead of applying vaccine to our citizens, the government is donating it...