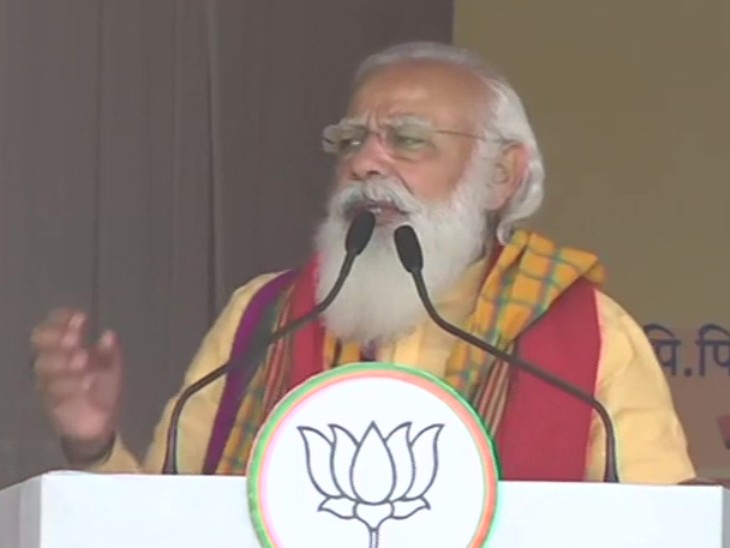 In Tamulpur, Assam, Prime Minister Modi said that the people here have suffered violence and instability for decades, so they have decided to form the NDA government again.

Prime Minister Narendra Modi held a rally in Tamulpur, Assam on Saturday. He said that the people of Assam have once again made up their mind to form the NDA government. The people here will no longer accept Assam for decades of violence and instability.

Modi said that the definition of secularism (secularism) has changed in the country. Now those who try to discriminate for the vote bank and to divide the society are called secular. Our government works for everyone without any discrimination, it is called communal.

Modi and Mamta will be face to face in Hooghly, Bengal today
The third phase (31 seats) is to be voted on 6 April in West Bengal. Earlier, political parties have thrown their full strength. Today there is a rally of Prime Minister Narendra Modi and Chief Minister Mamata Banerjee in Hooghly, Bengal. There is a difference of only 75 minutes in their rallies. First is Mamata Banerjee’s rally. She will address the gathering at Tarakeswar at 1.30 pm.

On the other hand, PM Modi will hold an election rally in Haripal at 2.45 pm. In the rally of both, there may be a Shiva temple of Tarakeswar at the center. It is a famous Hindu pilgrimage site. BJP from Tarakeswar has Swapan Dasgupta and TMC has fielded Ramendu Singha Roy. After holding a rally in Haripal, Modi will rally at Sonarpur in South 24 Parganas at 4.15 pm.

Have heard about Mamta – Didi will fight any other seat as well
Earlier, Prime Minister Narendra Modi held a rally in West Bengal on Thursday. He took a jibe at CM Mamta Banerjee in Ulberia, Bengal. Modi said that he has heard that Mamta is going to fill the nomination from some other seat as well. First he decided to contest from Nandigram and the people of Nandigram responded to him. Now if she contests elections from anywhere else, then the people of Bengal are ready to answer them.

Sambit Patra said – The leg is shaking and telling, how much it is in pain
Earlier on Friday, BJP leader and Spokesman Sambit Patra had criticized West Bengal Chief Minister Mamata Banerjee on her leg injury. Patra has shared a video on her social media account, writing, “Poor feet … moving and telling .. how much pain she is.”

Preparations to increase vaccine supply: Russia’s Sputnik-V may get emergency use...

Mukul - 11 April 2021
Hindi newsNationalVaccine News And Update: India To Have 5 More COVID Vaccines By Oct, Sputnik Expected To Get Emergency Use Nod In 10 DaysTroubled...
Go to mobile version