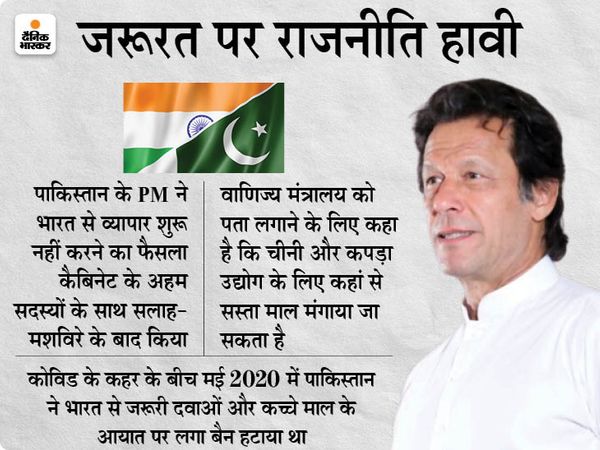 Pakistan Prime Minister Imran Khan has decided that his country will not do any trade with India after creating all-round uproar over allowing the import of sugar and cotton from India. According to media reports on Saturday, Khan has taken this decision after consulting with key cabinet members to get both products from India.

What step is the government of Pakistan taking?

Pakistan’s well-known media house Dawn has reported quoting sources that the PM has instructed the cabinet to take immediate steps to help the textile and sugar industry after consultations. According to Dawn, Khan on Friday asked the Commerce Ministry and the team of economic advisors to find out where cheaper goods could be sourced for those industries.

What was the basis of the decision to import from India?

Several proposals have been placed before the Economic Coordination Committee (ECC). The committee considers the suggestions that it has come from the economic and commercial perspective. When the ECC considers all the proposals, its decision is sent to the cabinet for final approval. According to the media house, in the recent case, a proposal to procure cotton, cotton yarn and sugar from India was sent to the committee keeping in mind the domestic needs.

What did Imran Khan do before deciding?

Sources said that on Friday, Khan consulted with key cabinet members for the decision to allow sugar, cotton and cotton yarn from India. They have decided that Pakistan cannot do any kind of trade with India under the present circumstances. The recommendations of the ECC sent to the Cabinet for importation of all three products were prepared from a business perspective.

Pakistan has broken relations with India?

The PM-led cabinet had on Thursday rejected the committee’s proposal to procure cotton from India. Foreign Minister Shah Mehmood Qureshi had said that business relations with him cannot be normalized until India withdraws the decision to withdraw the special status given to Jammu and Kashmir. Pakistan withdrew air and road service with India and stopped trade and rail service with India on 5 August 2019 when J & K’s special status was withdrawn.

What was the import ban from India last year?

The ECC, headed by Finance Minister Hammad Azhar, recently raised the two-year ban on imports from India, a day before it suggested to import cotton and sugar from neighboring countries. The ECC’s decision had raised hopes of India and Pakistan resuming bilateral trade. In May 2020, Pakistan lifted the ban on import of essential drugs and raw materials, among other Kovid.

New breed cases are increasing in the US as well: new...

Nitish - 5 April 2021
Hindi newsInternationalNew Varieties Of The Virus Are 60% More Susceptible To Infection, They Are 67% More Deadly Than The Old.Troubled with Ads? Install...
Go to mobile version