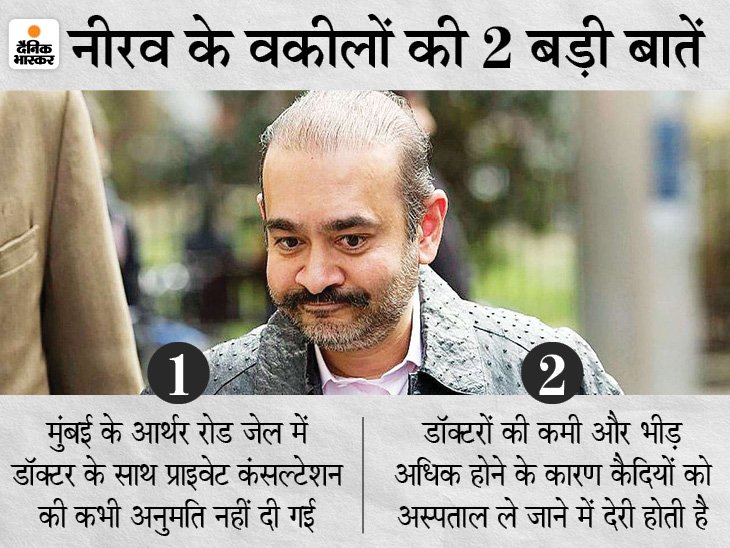 Wanted diamond trader Nirav Modi in PNB scam is adopting new tactics every day to avoid coming to India. During the hearing held in a UK court on Wednesday, Nirav’s lawyers cited the poor condition of jails in India. Lawyers said that in such a situation, Nirav can get into depression and go into a state of suicide. Because of this extradition should not happen.

Nirav virtually attended the hearing at Wentworth Prison in south-west London. Nirav’s lawyers have filed a petition against the magistrate’s court ordering extradition in February and approved by UK Home Minister Priti Patel in April.

Difficult to go to hospital in Mumbai
During the hearing of the new petition before Justice Martin Chamberlain, Nirav’s lawyers told that due to shortage of doctors and overcrowding, there is a delay in taking prisoners to the hospital when needed. Modi informed about the deplorable situation in Arthur Road Jail in Mumbai. His lawyer told that private consultation with the doctor was never allowed in Arthur Road Jail. He said that Modi’s mental condition is not good and due to increased pressure, he may become mentally ill.

Doctor’s report cited
Nirav’s lawyers referred to the report of psychiatrist Dr. Andrew Forrester, which was presented in the Westminster Magistrates’ Court. Forrester had said in the report of 27 August 2020 that not at the moment, but there is a danger of increasing suicidal tendencies in Nirav. Referring to the situation of Corona in India, the lawyers also argued for the poor health system here. The hearing is still going on in the court.

What will happen in the jail where Nirav Modi will stay?
The Prison Department of Maharashtra had shared information about Barrack No-12 in Westminster Court in London in 2019 itself. The Prison Department had told that the place where Nirav Modi will be kept will be of high security and he will also get medical facility there. In August 2020, Westminster Court had also seen the video of Barrack No-12. Only after this, the court allowed Nirav Modi to be brought to India.

The court has said that Nirav Modi will be completely safe in barrack number-12. Nirav’s argument was that his mental condition is not good and if he is sent to India, he will commit suicide. On this also, the court said that there is no chance of Nirav committing suicide in barrack number-12, because there his health will be fully taken care of.