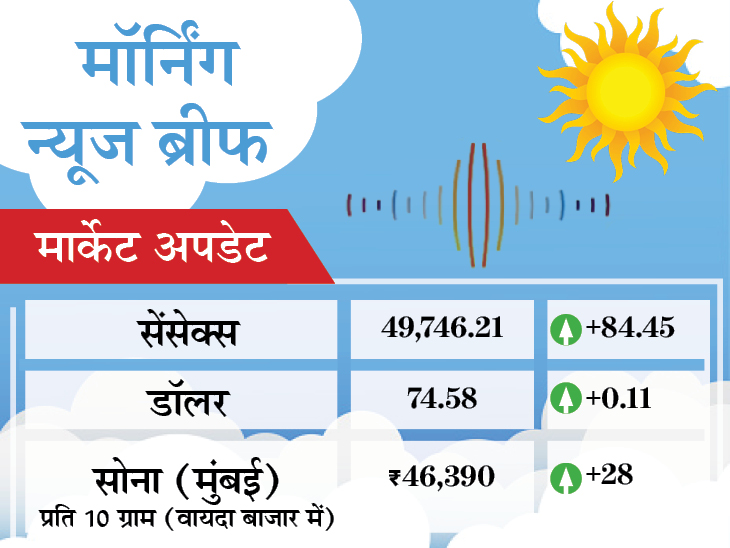 Hi!
What is the court’s decision on Varanasi’s Gyanvapi mosque? What did the Supreme Court say in Maharashtra’s 100 crore recovery case? Which country banned the entry of Indians? This morning, we have brought such special news for you. So let’s start the morning news brief…

First let’s see what the market is saying ..

Today these events will be monitored ..

Country world
CRPF jawan Rakeshwar Singh released from Maoist captivity
CRPF’s Cobra Commando Rakeshwar Singh, who was held hostage after the encounter on 3 April in Bijapur, Chhattisgarh, has been released by the Naxalites. 23 soldiers were killed in this attack. After the release of Rakeshwar, the Naxalites have said that the jawan should be sent home and send a photo of him along with the family members. IG Sundarraj P. of Bastar Range issued a statement saying that the help of some locals including Padmashri Dharmapal Saini and Gondwana Coordination Committee President Telam Boraiya was taken for the release of the jawan. Home Minister Amit Shah also spoke to Rakeshwar Singh over phone.

Bhaskar Poll on IPL: Fans want new champion
The 14th season of the Indian Premier League (IPL) is scheduled to begin on Friday. In the Bhaskar poll, most of the fans said that a new team can become the champion this time. Chennai Super Kings (CSK), captained by Mahendra Singh Dhoni, and Mumbai Indians (MI), led by Rohit Sharma, have got support at number two. Bhaskar did this poll on social media. In this, 2 questions were asked. The first was whether the team that had won the title earlier this time would win the title. This option received 45.9% of the votes. The second question was whether a new team would become the champion. It got 54.1% votes.

SC’s yes to CBI investigation against Anil Deshmukh
The Supreme Court has rejected the plea of ​​Maharashtra government and former state home minister Anil Deshmukh. Both challenged the decision of the Bombay High Court, which ordered a CBI inquiry into allegations of recovery of 100 crores. Former Mumbai Police Commissioner Parambir Singh accused Deshmukh of giving a recovery target. During the hearing, the Supreme Court said that it is a matter related to 2 people sitting in a big post. To maintain the trust of the people, an impartial inquiry is necessary. We will not interfere in the order of the High Court. The primary investigation being conducted by the CBI will continue.

Sachin Vaz got 1.5 crore rupees in one account
NIA has received Rs 1.5 crore from a bank account of Mumbai Police’s suspended API Sachin Vazh caught in the Antilia case. Solicitor General Anil Singh told the NIA court that getting such a huge amount in an account of Sachin Vazh, who describes himself as honest, creates doubt. NIA wants to investigate how and where did so much money come from? NIA questioned former ACP and encounter specialist Pradeep Sharma, who was mentor of Sachin Vazh, for the second consecutive day. In the case of Hiren’s murder, the NIA is investigating whether Pradeep Sharma was aware of his intentions?

Modi said – need more testing than vaccine
Prime Minister Narendra Modi held a meeting with the Chief Ministers of the states regarding Corona. After the meeting, Modi said that many states including Maharashtra, Chhattisgarh, Punjab, Madhya Pradesh and Gujarat have also crossed the peak of First Wave. We have won the battle without a vaccine before. Now we have the vaccine. Now we have to emphasize on testing. Let us all celebrate the Teeka festival from 11 April Jyotiba Phule’s birth anniversary to 14 April Baba Saheb’s birth anniversary. West Bengal Chief Minister Mamata Banerjee once again kept away from this meeting. The Chief Secretary of Bengal attended the meeting.

Archaeological survey of Gyanvapi Mosque of Varanasi approved
Archaeological survey has been approved in the case of Gyanvapi Mosque of Varanasi. The government will bear the expenses of the survey. Ashutosh Tiwari, the judge of the Varanasi fast track court, gave the verdict on Thursday. The court has ordered the survey to the Archaeological Survey of India (ASI). The court has said that a committee of 5 people should be formed for this. It should also include two people from the minority community. Earlier, during the hearing on April 2, the decision was reserved after debate by both the parties.

Expander
There will be vaccination in offices from Monday, know its process?
At present, all people above 45 years of age are being vaccinated in the country. In this series, the central government has approved the introduction of the vaccine in government and private offices from Monday, April 11. The Center has asked the states to prepare for this. Who will be vaccinated in the vaccination camp on the workplace? Will these camps be held in every government and private office? Which office staff will be vaccinated? Can people who have already had their first dose of vaccine get the second dose done in the office itself? Know the answers to these questions here.

Delhi AIIMS will have only urgent surgeries from April 10
Corona’s fast pace in the country is not stopping. On Thursday, 56,286 new cases were reported in Maharashtra, 7,437 in Delhi, 6,570 in Karnataka and 4,021 in Gujarat. In view of the increasing patients of Corona, only emergency surgery will be done in AIIMS Delhi from 10 April i.e. Saturday. The Uttar Pradesh government has imposed a night curfew in the capital Lucknow, Prayagraj, Varanasi, Kanpur and Noida. On the other hand, the Corona report of Kerala CM Pinarayi Vijayan has also come positive. He gave this information on social media. Voting for the assembly elections took place on 6 April in Kerala.

Entry of Indians banned in New Zealand from 11 to 28 April
In view of the increasing cases of Corona, New Zealand has banned the arrival of Indians. This ban will be in force from 11 to 28 April. New Zealand Prime Minister Jacinda Ardern said that 17 out of the 23 corona-infected people in the country in the last 24 hours were Indians. They were all returned from India. Therefore, it has been decided. However, he said that the ban is temporary. This will also apply to New Zealand citizens. If needed, travelers coming from other countries will also be banned. Singapore has also stopped visas of 8,000 Indians in view of rising cases of corona in India.

Didi’s answer to EC- Give 10 notices, I stand by my statement
In response to a notice received after appealing to Muslims to vote for TMC, West Bengal Chief Minister Mamata Banerjee has said that even if the Election Commission issues 10 notices, they stand by their statement. Mamta said this in Domjur in Howrah district. He said that I will continue my fight against those who want to divide Bengal into religion and sect. Why does the Election Commission not file a complaint against BJP’s star campaigner and Prime Minister Modi? Voting for the fourth phase is scheduled on 10 April in West Bengal.

SC ban on Rohingya Muslims to report
The Supreme Court has banned the sending of 170 Rohingya Muslims kept in Detention Center in Jammu to Myanmar. The Supreme Court issued the order on Thursday, saying that Rohingya refugees living in the camp cannot be sent until the entire process of deportation is followed. The court rejected the petitioner’s demand that he appeal for the release of these people. Prashant Bhushan, appearing for them, said that the lives of Rohingya Muslims are in danger in Myanmar, so they should not be deported.

Today’s positive news
Bahu’s startup, made with a SaaS recipe, costs Rs 4 lakh every month. Business of
TS Ajay and his wife Sonam Surana from Chennai are running their own homemade startup. They are marketing many products including different types of chutney and pickle. His business, which started two years ago, has spread to many states including Delhi, Rajasthan, Maharashtra. More than a hundred orders are coming to him every day. With this, they are earning three to four lakh rupees every month.
It all started with Ajay’s mother’s diary. In this diary, recipes of different types of traditional foods were written. Ajay’s mother died in 2017.
Read full news …

What’s more in the headlines ..