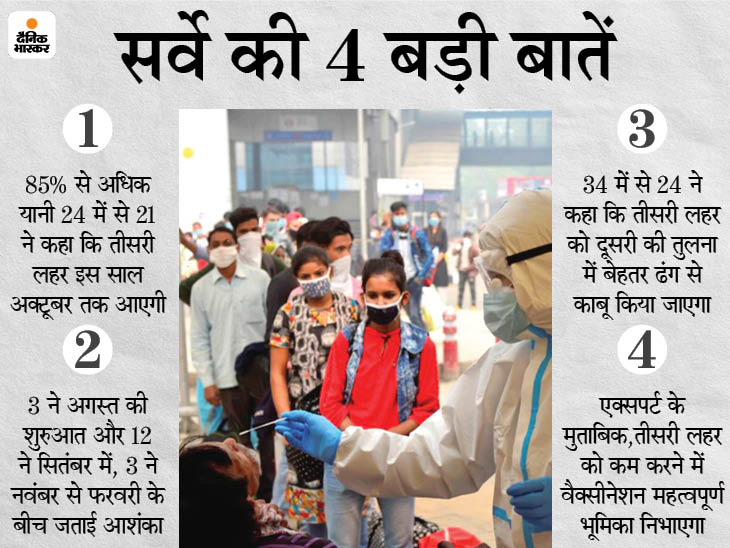 A snap survey of 40 health experts, doctors, scientists, virologists, epidemiologists and professors from around the world, conducted between June 3 and 17, has shown that vaccination will play an important role in reducing the third wave.

Claims regarding August and September also
According to the survey, more than 85% i.e. 21 out of 24 said that the third wave will come by October this year. Of these, 3 predicted its arrival in early August and 12 in September. The remaining 3 expressed the possibility of its arrival between November and February.

More than 70% of the experts i.e. 24 out of 34 said that the third wave will be handled better than the second. The current wave has proved to be far more deadly. During this the health system collapsed. It has also been longer than the first wave of the pandemic. He said the second wave became more devastating due to lack of vaccines, oxygen, medicines, beds in hospitals.

Dr Randeep Guleria said – Third wave will be under control
On the other hand, Dr Randeep Guleria, director of AIIMS Delhi, has said about the third wave of corona that it will be more controlled. The vaccination program is going on fast in the country. By the time the third wave arrives, many people will have been vaccinated. Apart from this, there will also be some degree of natural immunity from the second wave, which will not allow it to be very effective.

154 days of vaccination completed in the country, more than 27 crore doses were administered
On Friday, 154 days of vaccination were completed in the country. According to the Health Ministry, more than 27 crore doses have been given so far. A total of 29 lakh 84 thousand 172 doses were given on Friday. Of these, 26.24 lakh were given the first and 3.60 lakh were given the second dose.

Odisha created record in vaccination: Bhubaneswar became the first city in the country to do 100% vaccination, applied more than 18 lakh vaccine doses...