Relieving news is coming to the corona. With the beginning of Ramadan this year, Zion’s entry into the mosque of Mecca will begin. Saudi Arabia has decided that only those who have already been vaccinated by Corona or who have been infected by Corona have been given the entry here. According to news agency AFP, people who have received their first dose of vaccine will be given entry after 14 days of quarantine. Entry with similar restrictions will be allowed in Madina.

Haj pilgrimage could not be done due to Corona
Religious sites around the world were closed last year due to the Corona epidemic. The Saudi government also banned Umrah on 27 February last year. Umrah is similar to Hajj, but the journey to Mecca and Medina in the fixed Islamic month is called Hajj. The government had sealed all boundaries to prevent the epidemic.

There were 4.68 lakh cases in the world on the previous day
Corona cases are increasing rapidly worldwide. In the last 24 hours, the Corona report of 4.68 lakh people in the world came positive. During this time 7,255 people also died. Most daily cases are being found in India. On Monday, 96,557 cases were reported in India. This was followed by 50,329 patients in the US and 42,551 in Turkey. Brazil came in fourth with 38,233 new cases. There were 31,359 cases on Sunday.

Preparations to relax the lockdown in Britain 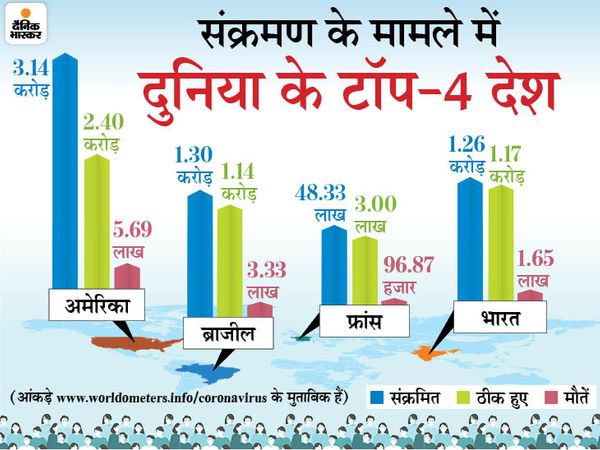