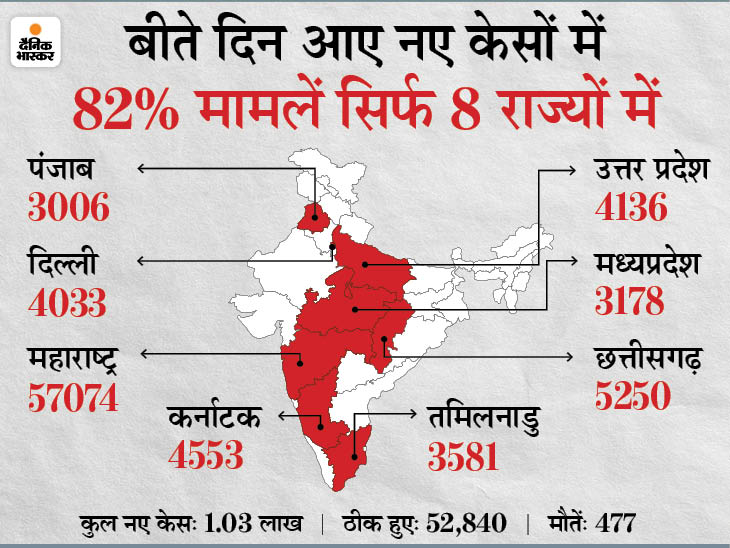 A record 1 lakh 3 thousand 794 new infections were found in the country on Sunday. This is the largest figure of a day. Earlier, on September 16, 97,860 new patients were found. In the last 24 hours, 52,840 patients recovered and 477 died. The number of active cases, ie patients undergoing treatment, has also gone up by a record 50,438. India is the only country in the world, where more than 1 lakh cases have been found in the last 24 hours.

Although the epidemic has become frightening in the whole country, but in Maharashtra it is completely uncontrollable. Here the data of new infected is touching new records every day. There were 57,074 cases in the state on Sunday. Comparing this with the new infections found on Sunday in other countries except India, only France (60,922) was ahead.

So far, about 1.26 crore people in the country have been affected by this epidemic. Of these, about 1.17 crore have been recovered and 1.65 lakh have lost their lives. There are 7.37 lakh active cases, that is, they are being treated. These figures are taken from covid19india.org. 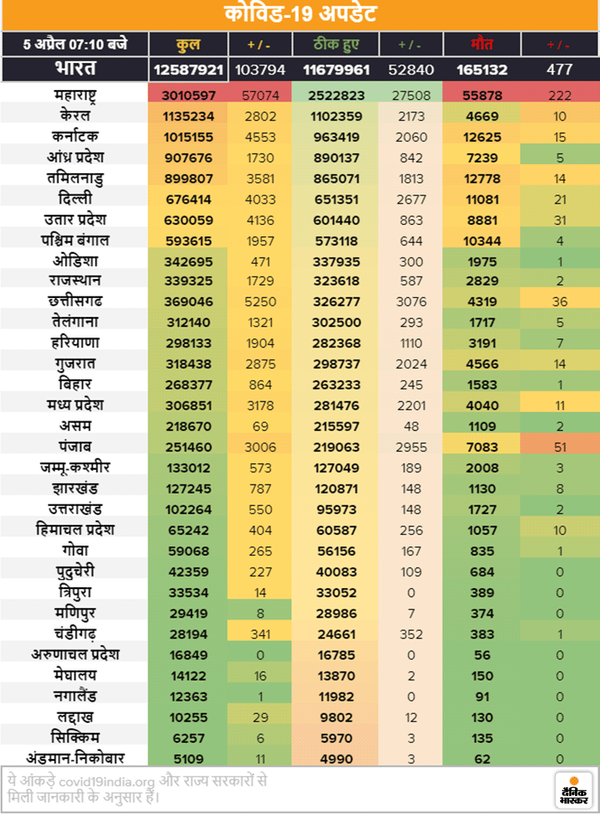 Most of the major states are …
1. Maharashtra
57,074 new patients were found here on Sunday. 27,508 patients recovered and 222 died. So far, 30.10 lakh people have been affected by the epidemic in the state. Of these, more than 2.5 million people have recovered, while 55,878 have died. Currently, about 4.01 lakh people are being treated here.

5. Gujarat
2,875 new corona patients were found here on Sunday. 2,024 patients recovered, while 14 died. So far, 3.18 lakh people have been affected by the epidemic in the state. Of these, 2.98 lakh have been cured, while 4,566 patients have died and currently 15,135 people are undergoing treatment.

6. Rajasthan
1,729 infected were identified here on Sunday. 587 patients recovered and 2 people died. So far, 3.39 lakh patients have been affected by the epidemic in the state. Of these, 3.23 lakh have been cured, while 2,829 have lost their lives. Currently, 12,878 patients are undergoing treatment.

Another blow to the NDA: BJP’s ally Goa Forward Party in...