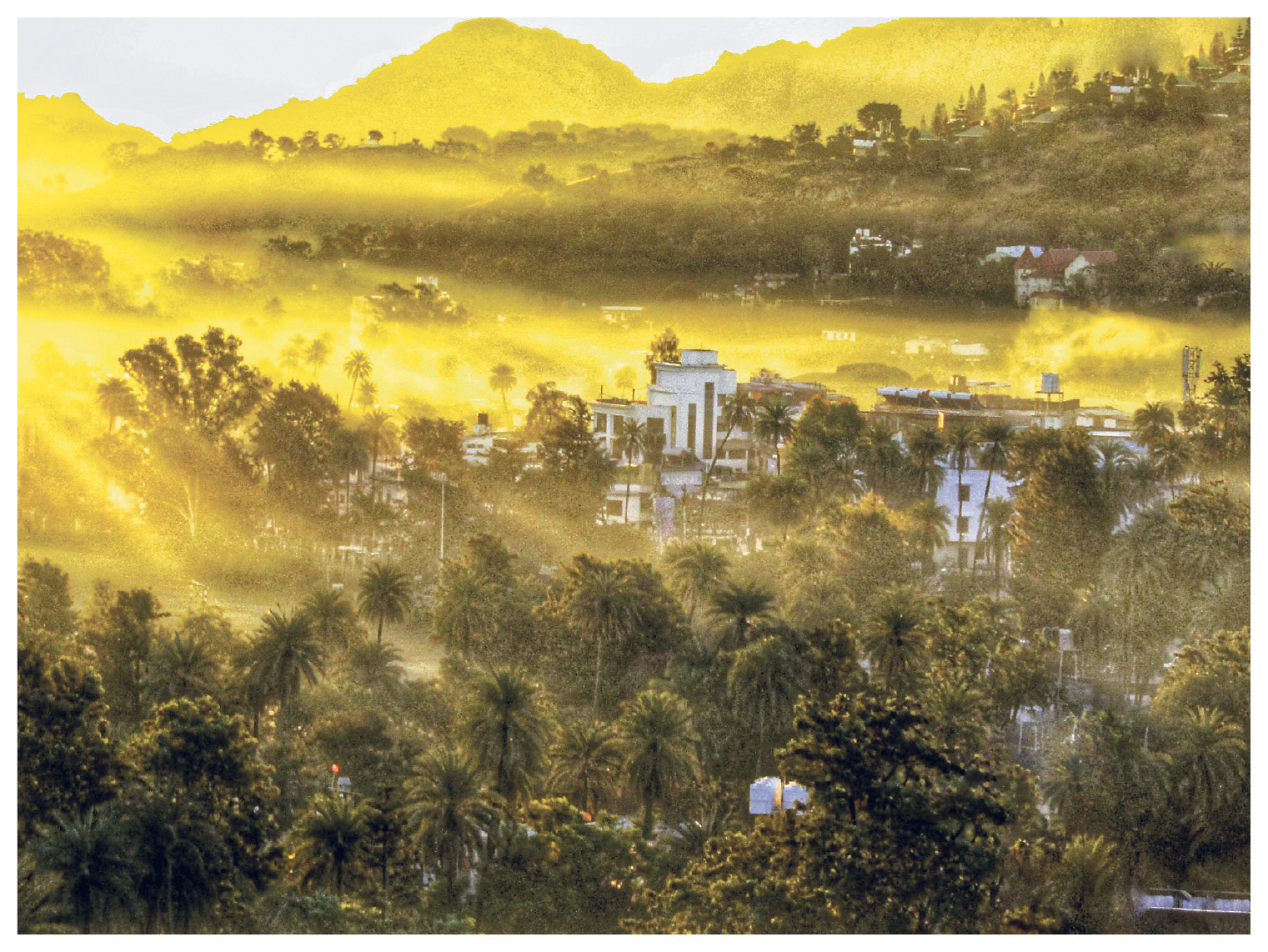 Mount Abu in Rajasthan is experiencing a severe winter. Fog enveloped here on Sunday morning. Winter has again started to affect the country. There was snowfall in Katra in Jammu on Sunday. Due to western disturbances in North India, the Meteorological Department has predicted snowfall in Kinnaur, Lahaul-Spiti and Chamba in Himachal Pradesh. Meanwhile, tourists are also increasing in Himachal. Conditions of traffic jam have started appearing.

According to the Meteorological Department, Delhi-NCR may get colder from December 30. The cold wave is also expected to continue till 3 January. During this time the minimum temperature can fall from 3 to 4 degrees Celsius. It was six degrees Celsius on Sunday. Speaking to the news agency ANI, Dr. RK Genamani, Senior Scientist, Meteorological Department, said – the change in weather is due to western disturbances.

On National Highway-3 at Mandi in Himachal Pradesh, traffic jam occurred due to tourist trains.

On National Highway-3 at Mandi in Himachal Pradesh, traffic jam occurred due to tourist trains.

Cold wave in UP, Sonbhadra was the coldest

It is very cold in Punjab these days. Fog also enveloped Jalandhar on Sunday.

Yellow alert in Jammu and Kashmir

Hot cold: snowfall in Katra Jammu; tourist rush in Himachal Pradesh; The new year will start with a cold wave in Delhi

Temperatures in Rajasthan may fall by 3 to 5 degrees

The cold has again started showing effect in the state. The temperature in six cities of Rajasthan was recorded below five degrees on Saturday night after the mercury fell by one to two degrees. The day temperature is also expected to be between 18 and 20 degrees due to cloudy conditions. The mercury in Jaipur was 8.4 degrees. The Meteorological Department has predicted a drop in night temperature by 3 to 5 degrees.

Dense fog enveloped Sriganganagar in Rajasthan till 8.30 am.

Chances of rain in Haryana, winter will also increase

Panchkula, Yamunanagar, Ambala, Kurukshetra, Karnal and around these districts are expected to fall from Sunday to Monday. This will cause further decline in mercury. Parts of these districts were cloudy since Friday.

Visibility was reduced considerably due to fog spraying in Jind, Haryana.

Gaya was the coldest in Bihar

The temperature has dropped below 10 degrees in entire Bihar including Patna. There is no relief from the cold here. The Meteorological Department says that the effect of snowfall on the mountains is being seen on the plains. Patna’s minimum temperature on Saturday was 8.2 degrees Celsius, 1.2 degrees below normal.

There is mist in Patna every morning. The mercury is running below normal here. Due to excessive winter, the roads here are less crowded than normal.

No effect of cold will be seen in Jharkhand

Hot cold: snowfall in Katra Jammu; tourist rush in Himachal Pradesh; The new year will start with a cold wave in Delhi

Punjab surrounded by fog at the end of the year

According to the Meteorological Department, Punjab may receive rain till Monday. There is dense fog in most of the districts here. The situation is expected to remain here till the beginning of the new year. Light rain is expected in Pathankot, Gurdaspur and Ropar. Adampur was the coldest in the state on Saturday. The minimum temperature was recorded at 2.5 degree Celsius. The mercury settled at Pathankot at 3.5, Halwara at 3.7 and Bathinda at 3.8 degrees.

Shadow fog in Sangrur, Punjab at 8:15 am. Adampur was the coldest in the state here on Saturday. The minimum temperature was recorded at 2.5 degree Celsius.

Himachal received fresh snowfall in Lahaul Spiti on Saturday. Due to this, there was a surge of tourists, causing a blockade in a part of the Atal Tunnel. Himachal may receive snowfall and rain. Keylong was the coldest in the state with -11.10.

In many areas of Arunachal Pradesh, the temperature has gone below minus 10 degrees. Here winds are in the range of 80 to 90 km per hour. Snowfall has also been occurring in the hill areas of the state for the last few days.

The ITBP jawans are patrolling to the zero line wearing snow-suits amid tension over the LAC in eastern Ladakh.

Goods transported by yak at an altitude of 15 thousand feet

Our troops are stationed at LAC in places where it is not possible to reach the roads amidst snowfall. Therefore, necessary goods are being transported by yak and mule at an altitude of 15 thousand 500 feet.

Porter carrying luggage on mule for soldiers stationed at LAC.

Drizzle can occur in Chandigarh, temperature will fall

Chandigarh can be cloudy and mild drizzle may occur after Sunday afternoon. Rain is also expected on Monday. According to the Meteorological Department, after this the temperature will fall and the cold will also increase. Fog can also occur. Chandigarh recorded a minimum temperature of four degrees on Saturday.

BJP’s punch for five states: BJP is engaged in making a special strategy, the deadline of December 25 has been fixed to complete the...

Modi’s speech in UN: Prime Minister said – we have given...

Mukul - 14 June 2021
New Delhi2 minutes agocopy linkPrime Minister Modi made a speech at a special meeting of the United Nations on Monday. They literally got...
Go to mobile version