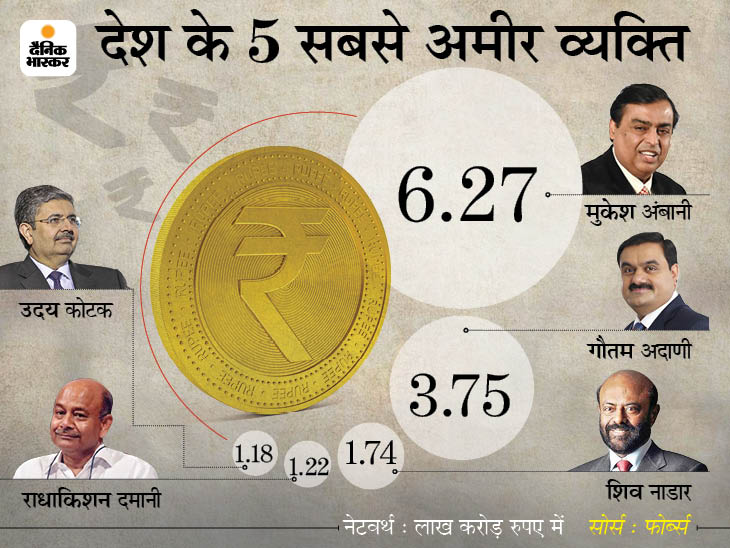 After these big businessmen, third is the founder of IT sector company HCL Tech, Shiv Nadar. His total net worth is around Rs 1.74 lakh crore. Radhakishan, popularly known as Retail King, ranks fourth in the Damani list. Avenue Super Mart is the company of D-Mart.

Two new names in the top-10 include Cyrus Poonawala of Serum Institute of India (SII) and Dilip Sanghvi of Sun Pharmaceuticals. SII is the largest company producing the Corona vaccine. Sunil Mittal and Family is 10th in the list. Their net worth is about 78.12 thousand crores.

This is the reason why there was tremendous investment in Mukesh Ambani’s companies despite Corona, which was around 2.60 lakh crore rupees ($ 35 billion). This has also made Reliance debt free.

Gautam Adani’s wealth increased by 5 times
On the other hand, the property of the famous Gautam Adani, also known as Port and Infra Tycoon, has also grown rapidly. Adani Enterprises and Adani Green Energy are increasing their wealth due to record gains in stocks. Adani increased its stake in the country’s second busiest Mumbai airport to 74%.

Corona’s impact on air travel: Hong Kong suspended flights to India after receiving infection cases, will be halted from April 20 to May 3

Tika Utsav across the country from today: PM Modi’s articles in...

Mukul - 11 April 2021
Hindi newsNational'Tika Utsav' Across The Country Today PM Modi Wrote An Article In The Name Of The Country; Said More And More People...
Go to mobile version