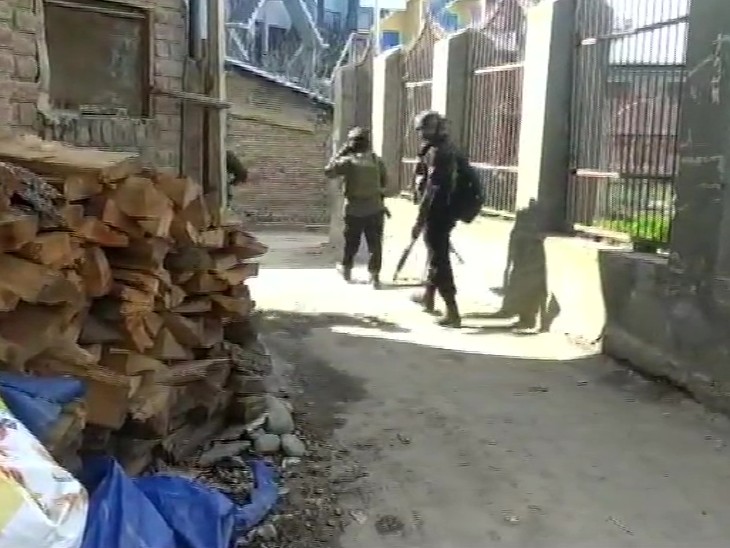 The security forces surrounded the terrorists from all sides. After this, they started firing. -File

On Thursday, 3 militants were killed by security forces in Janmohalla area of ​​Shopian district in Jammu and Kashmir. The soldiers had trapped him. Seeing themselves surrounded from all sides, the terrorists started firing. After this, the soldiers took the front and killed 3 terrorists. At present, firing is going on from both sides.

Earlier, militants opened fire on the security personnel at Imam Sahib in Shopian town at around 3 pm on Wednesday, but no casualties were reported in the incident. After the firing, the attackers escaped, taking advantage of the chaos.

There are frequent encounters in Shopian
Security personnel are continuously encountering militants in Shopian district. On March 27, two terrorists were killed in an encounter at Vangam on March 27. Earlier, in the action on 22 March in Manihal, the soldiers killed 4 terrorists.

On April 5, in a major operation, the Special Operation Group (SOG) arrested the terrorist of the Islamic State of Jammu and Kashmir (ISJK). A pistol, 8 cartridges and a cash of one lakh 13 thousand rupees were also found from him. The terrorist was identified as Malik Umaid Abdullah resident Yaripora, Kulgam.

Rajinikanth admitted to Hospital after Blood Pressure, no COVID-19 symptoms

Rohit Rai - 25 December 2020
New Delhi: Megastar Rajinikanth has been rushed to Apollo Hospital in Hyderabad after exhibiting extreme fluctuations in blood strain. Although Thalaiva reveals no signs of...
Go to mobile version