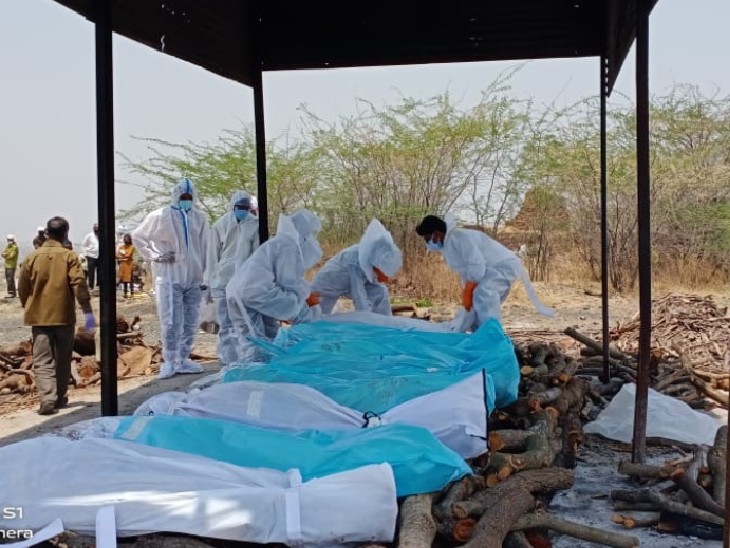 In the case of burning 8 bodies on the same pyre, officials say that it was done due to lack of space.

Along with the corona virus, the incidence of inhumanity is now increasing. One such incident came from Beed in Maharashtra on Wednesday evening. Here 8 people who died from Corona were cremated on the same funeral pyre. The administration argues that the people were not allowing the burnt bodies of these patients to be burnt in the crematorium, hence finding another place where their actions were performed.

Officers had to find a place for funeral
This shameful incident is of Pathan Mandwa village of Ambajogai municipality in Beed district. Here a separate place has been set for the funeral of the corona-infected dead. Ambajogai city council chief Ashok Sable said that people here opposed the funeral of Corona patients at the crematorium. Therefore, the authorities found another place for funerals. Due to lack of space in the new place, the last rites were all performed simultaneously.

Cremated funeral pyre
Ashok Sable said that it was decided to conduct the last rites on Mandwa Road, 2 km from the city. Due to the lack of space, a large pyre was made on Tuesday and cremated 8 bodies on it. The corpses of the patients were kept at a certain distance from each other.

The administration says that the corona virus infection is spreading rapidly and due to this the death toll is expected to increase, so the temporary crematorium will be developed before the onset of monsoon. Preparations are being made to make it water proof. In Beed on Tuesday, 716 cases of corona have been reported. So far 28,491 corona patients have been found here and 672 people have died.

Beed’s Ambajogai Corona’s hotspot
In Beed’s Ambajogai, around 4 new positive cases have been reported in 4 days. The administration imposed a 10-day lockdown in the district to curb the growing crisis in Corona. So far, 25436 corona patients have been cured.

No wood for funeral in Bhusawal
There is a shortage of wood for the last rites of the dead at Bhusaval in Jalgaon district. The cremation ground near the Tapi River usually cremates 10 to 15 dead every day. At present, this number is increasing everyday and even dry wood for dead bodies is not available. Woods are being cremated from the villages and cremated. The cremation line is so long that people have to wait for hours to burn the pyre.

Lockdown in Delhi: From today till the morning of 26 April,...