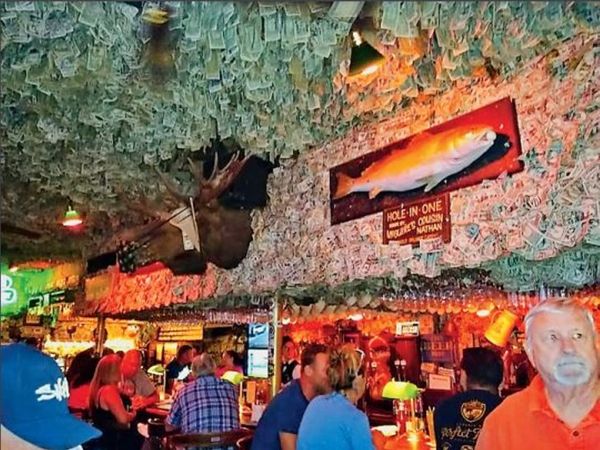 Notes worth two million dollars are hanging in the ceiling of the pub.

McGuire’s Irish Pub in the US state of Pensacola, Florida, is in the news for its interiors more than its food and drinks. Yes, that’s because the ceiling of the pub which is so amazing. There are stylish lights here, along with them, notes are also kept hanging and that too real.

According to an estimate, notes amounting to two million dollars are hanging in the ceiling of the pub. Now it is obvious that if such a huge amount would have been kept in the pub just for designing, then which thief would not be tempted to come here and steal it. There have been attempts of theft here too, but every time the thieves got caught. The owners of the pub treat these notes kept for decoration and also pay tax as property.

Even if a thief steals something from here, it will be of no use to him.

This pub was started in 1977 by Martin McGuire and his wife Molly. McGuire handles the bar and Molly the tables. After opening the pub, the customer first gave a dollar tip to Molly, then she signed the date and hung it there as a goodluck. Little did she know at that time that what she was doing would become a tradition that is being followed even today.

When people in the pub saw Molly’s tip dollar, they started autographing their tip so that they could hang it on the ceiling with the tip amount. Just since then this collection kept on increasing. A close friend of McGuire said, “This pub, spread over 15,000 square feet, has dollars hanging on every ceiling. When the space was less, the owners started putting it on the walls.

An employee working here with people outside the pub tried to steal five thousand dollars. Many people take dollars from here but they do not walk because the tip date is written on them. Due to the date written on the marker, they come in the identity of the police.