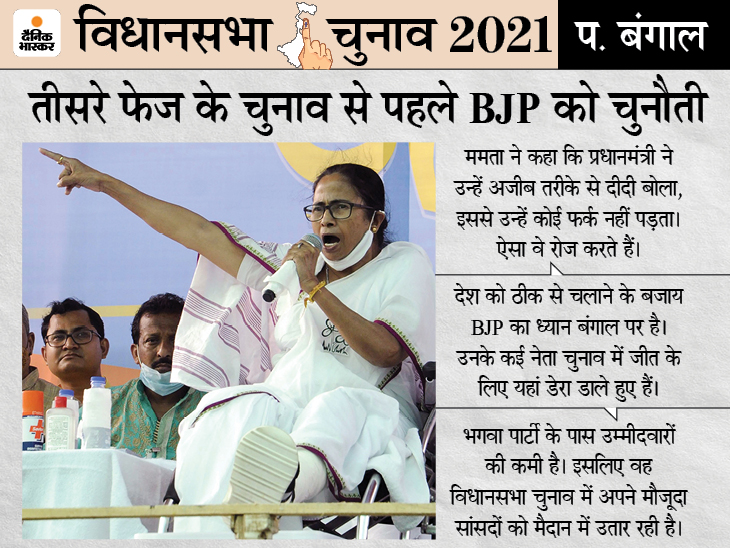 West Bengal Chief Minister Mamata Banerjee on Monday claimed that her party is winning the Assembly elections in Bengal this time. During this time, he also expressed his intention to win Delhi. Banning the BJP for the third time to gain power in the state, Mamta targeted PM Narendra Modi and Home Minister Amit Shah, saying that the people of Bengal will rule here.

Describing himself as the Royal Bengal Tiger, the TMC Chief said that no Gujarat people would rule in Bengal. Referring to his injury, he said that I will win Bengal with one leg and Delhi with two. Mamta said that the Prime Minister strangely called her Didi, it does not matter to her. They do this every day.

Third phase voting on Tuesday Will be
Mamta was injured in Nandigram during the election campaign on 10 March. He blamed BJP supporters for this. Mamta said that she was attacked for preventing her from campaigning in the election. However, later the Election Commission said that it was an accident and not an attack. There have been two phases of the assembly elections in West Bengal. Voting for the third phase is scheduled on Tuesday. This election is a do-or-die for both TMC and BJP.

BJP focuses on Bengal instead of running the country
Mamta criticized the central government for the Naxalite attack in Chhattisgarh on Saturday. 22 soldiers were killed in this attack. Mamta said that instead of running the country properly, the entire focus of BJP is on Bengal elections. So she is bringing her leaders from all over the country to campaign in Bengal. These leaders are camping in the state to win the elections.

Banerjee said in a public meeting in Chunchura that the saffron party lacked candidates. That is why they are fielding their sitting MPs in the assembly elections. BJP has fielded Lok Sabha MP Lockett Chatterjee from this seat. Lockett Chatterjee is an MP from Hooghly.

‘Should have focused on corona by reducing voting phase’
When elections were held in Bengal in 8 phases, Mamata Banerjee said that elections could be held in 3 to 4 phases. He asked if it was not right that the election schedule would be kept short in view of Corona. The focus was on ending the epidemic quickly. Banerjee claimed that till now the state of infection in the state is not serious.

‘MLAs made mistakes, but give them one more chance’
Mamta admitted that TMC MLA Tapan Mazumdar from Chunchura and Tapan Dasgupta of Saptagram did not work well. The ruling party has fielded them again. He asked voters to forgive the mistakes of both MLAs and then give them a chance. Also said that they will not do it again. Mamta said that if we do not win in Hooghly district then we will be caught in a big problem.

TMC won most of the 18 assembly seats in Hooghly district in the 2016 election. However, in the 2019 Lok Sabha elections, the BJP’s dominance was established here.

Raised the issue of closed factories
Mamta claimed that the central government refused to allow her to takeover the shuttered Jessup and Dunlop industry of Hooghly. This led to thousands of employees of both companies being unemployed. Dunlop’s factory in Shahganj, Hooghly has been closed since 2011. The oldest factory in the state, Jessup, has been closed since 2001. It started functioning from 1788. The Mamta government had passed bills to acquire them.

Jaya said that he broke his head, broke his leg but could not break his heart, mind and resolve to move forward. He made Bengal the best in the world. I believe that Mamata ji will do whatever she wants to do.

On Jaya’s support to Mamta, BJP national president JP Nadda said that I was in charge of Uttar Pradesh from where she (Jaya Bachchan) comes. He did not see there. They are also welcome here. Nadda arrived to rally in Tollygunge.