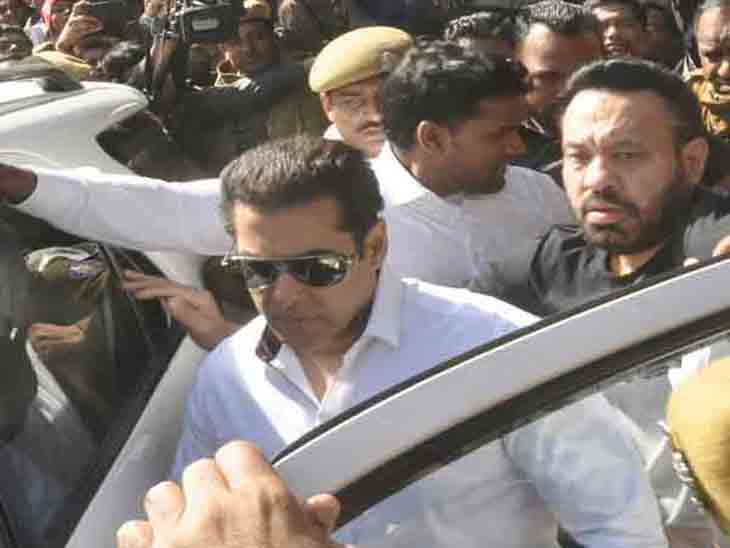 Actor Salman Khan was arrested in 1998 in Kankani village near Jodhpur for hunting 2 blackbuck. (File photo)

Actor Salman Khan got relief from the District Court of Jodhpur in the case of presenting false affidavit 18 years ago. The court rejected the state government’s petition on Thursday. Salman was virtually present in the court to hear the verdict. Another case was being registered against him in Jodhpur.

After the verdict, Salman’s lawyer Hastimal Saraswat said that this is the second time that the petition related to the case has been dismissed. The first Chief Judicial Magistrate has also dismissed it. We finally got justice after years of long hearings.

Salman had given the arms license to renew, said in court – lost
Salman was arrested in 1998 in Kankani village near Jodhpur for hunting 2 blackbuck. During the hearing of the case, the court sought arms license from him. On this, in 2003, Salman gave affidavit in the court and said that the license has been lost somewhere. In this regard, he also gave a copy of the FIR lodged in Bandra Police Station, Mumbai on 8 August 2003.

After this, the court came to know that Salman’s arms license was not lost, instead he had given it for renewal. Public prosecutor Bhavani Singh Bhati had then demanded that a case of misleading the court be filed against him.

Lawyer said – Salman was very busy, so forgot
During the final arguments of the case, Salman’s lawyer argued that the actor was too busy, so he forgot that his license was given for renewal. The lawyer, citing a Supreme Court verdict, said that if the accused in a case is of no avail and a false affidavit is produced by mistake, he should be acquitted.
If Salman were found guilty in this case, he would have been booked under section 193 of the IPC. There is a provision of a maximum of 7 years in prison and fine if found guilty.

Mukul - 31 December 2020
Photo is of Brahmaputra Ghat of Guwahati. Here the view of sunset on the last day of the year 2020 was something like this. The...
Go to mobile version