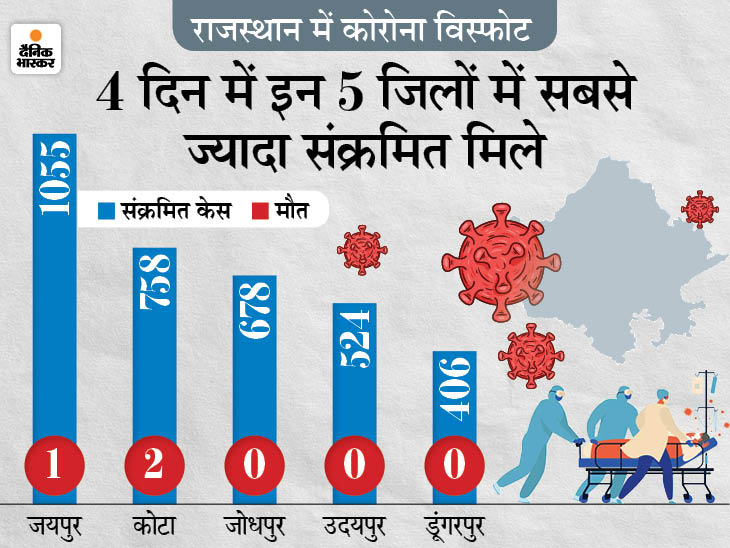 The state government has also intensified corona testing as the infection progresses.

Corona has become uncontrollable in Rajasthan. The situation can be frightening if vigilance is not exercised. Only 4 days of April have passed and 6,176 new patients have been received in the state. In April last year, 2,584 cases were received in the entire month (30 days), ie more than twice. In the second wave, corona cases are growing two to three times faster than the first.

In the last 24 hours, 1,729 new cases have been received in the state. Two patients have also died. With the increasing speed of Corona, the government has issued a new guideline by increasing the vigor from Sunday night. In this, the regular class from class 6 to 9 has been banned. Gyms, theaters, swimming pools have also been closed till 19 April.

A maximum of 100 guests in the wedding ceremony and social, religious, political, sports, entertainment and educational programs or events that will be held in the indoor hall have also banned the arrival of more than 100 persons.

More than 55% of cases in 5 cities
The maximum corona cases in the state are in Jaipur, Jodhpur, Udaipur, Kota and Dungarpur. A total of 3,421 new cases have been received in these cities in the first 4 days of the month, which is more than 55% of the total cases received in April. Rajasthan has the highest number of 1,055 cases out of 33 districts, followed by Kota, followed by Jodhpur, Udaipur and Dungarpur.

Death figures also started increasing
Cases of death have also increased in the state this month as compared to February, March. On an average, 2 patients die every day in four days. Recently, when Chief Minister Ashok Gehlot had video conferencing with the doctors, the doctors also said that the speed at which the infection is spreading, deaths could also increase in the coming days.

The positive rate has increased from 1.29 to 3.71%. How much corona infection has increased in Rajasthan can be gauged by looking at the weekly data for March. The positivity rate was 1.29% in the first week of March, which has risen to 3.71% between 27 March and 2 April. The most infected also came this week.

US Navy Dadagiri: operated near Lakshadweep without India’s permission; Said-...