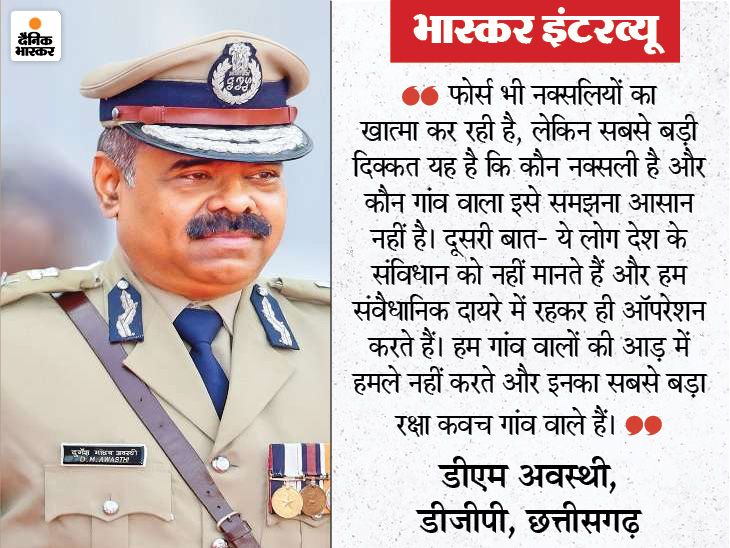 Naxalite attack in Bijapur has killed 24 soldiers. After this attack, questions have been raised about the operation and tactics of the security forces against the Naxalites. Why do we not learn from such attacks again and again? Do the security forces need to change their strategy or is Naxalism once again raising its head. Dainik Bhaskar posed some similar questions in front of Chhattisgarh DGP DM Awasthi. Here are some special excerpts of this conversation…

The soldiers have again become victims of Naxalite attack, do we not learn from the earlier attacks?
There is a review after every Naxalite attack. It is not about taking lessons or being missed. In the area of ​​Naxalites inside, the forests are so dense that there is always a possibility of attack. This area is very well known to the Naxalites. They have entered the area. They know the hiding place. In most cases, Naxalites are at high altitudes and below protective forces. Therefore, as much as you can make a tactical strategy, the risk of attack will remain.

Yes, we have decided as part of our strategy that the army will not go inside the village. However, some media reports are saying that this time the jawans had gone within or close to the village. Only after reviewing with our commanders can we say whether this happened or not, but the risk of such attacks will remain whenever such operations take place.

How is the relationship between the villagers and the Central Reserve Police Force?
The villagers are now relying on the security forces. This is a proof that CRPF camps are very deep inside. Wherever the security forces reach, development work also starts. Security forces deployed in Naxalite areas constantly try to make good relations with the villagers. Villages are in the middle of very dense forests, so they are difficult to get medical facility. Many times we took some pregnant women or some sick person from our helicopter to the hospital. The force’s supporting image has now been created among the villagers. During Corona, we worked to provide ration and medical facilities to the villages. 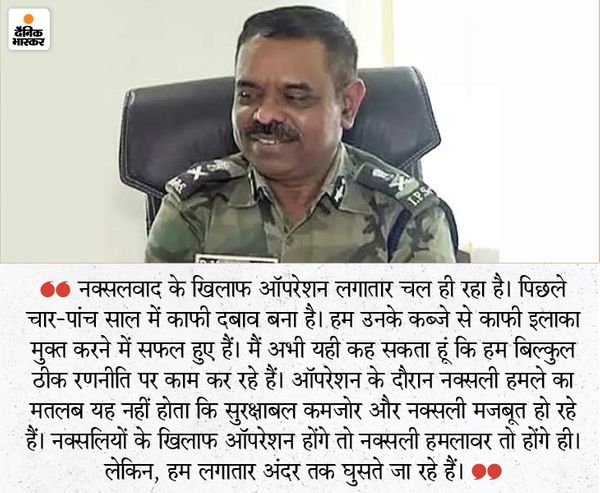 In 2015, the government started the Pragati Project to take stock of the development works in remote areas, did the development take place in Naxalite areas?
Yes, there has been a lot of development. New schools, buildings, roads have been built. Roads have been built in the areas where Naxalites were occupied for years, but the problem is that these people bomb the road and school every time. A few days before the latest anti-Naxal operation, these people had cut a large area of ​​the road at the place of encounter, but we are constantly setting up new camps.

A camp was recently built in Tarrem where this encounter took place. There is a Silger place next to it, a new camp is being built there as well. Many such new camps were built. From 2016 to 2021, we have opened more than 80 new camps. Constantly we are planting Naxal influence within our camp jungles. When new camps are built, the anxiety will increase and the risk of attacks will also increase, but once the camp is built, then there is no problem in getting there, road, school or electricity.

You have been in the Naxalite affected area for a long time, what is the philosophy of Maoism, has it made any difference?
Maoism relies on bullets, not ballets. They consider capitalism as their biggest enemy. It is simply a matter of bringing justice to the poor, equalization. They do not trust the constitution of the country. These people run their own separate government. His dream is that one day this government will be the government of the entire country. This philosophy of Maoists has been prevalent since the beginning, but yes, now the surrender has increased due to government policies.

What is the difference between the strategy of the Naxalites and the jawans that these people are successful in targeting the jawans?
The force is also annihilating the Naxalites, but the biggest problem is that who is a Naxalite and which village is not easy to understand. The second thing that I said above is that these people do not follow the constitution of the country and we operate only within the constitutional scope. We do not attack under the guise of the villagers and their biggest defense is the villagers. 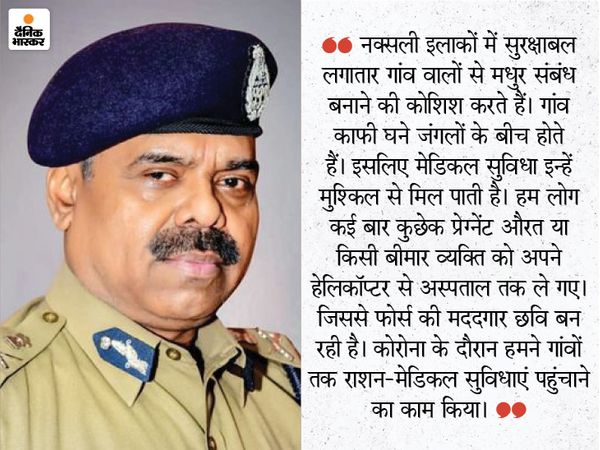 In a meeting held in Chhattisgarh on March 5, the Home Minister said that we will take this fight to the end, is there any preparation for any major operation?
Paramilitary forces are advancing in the fight against Naxalism. Our strategy is getting stronger. Operation against Naxalism is going on continuously. There has been a lot of pressure in the last four-five years. We have succeeded in liberating a lot of territory from their occupation. We are constantly pushing them inside.

There is a young man in the possession of the Naxalites, is there any talk about him?
Right now the Naxalites have not given us any offer. We are trying to talk to them through some former Naxalites and journalists.

The Naxalites are techno-friendly, the weapons are also modern, where do you get them all from?
The attackers seem poor to see the Naxalites, but the nexus of those who help them is large. The government is breaking it and we are trying to eliminate them here by fighting directly with the Naxalites. Weapons are found during looting and assault by security forces.

Firing outside US Parliament: Car rider near Capitol Hill injuring 2...