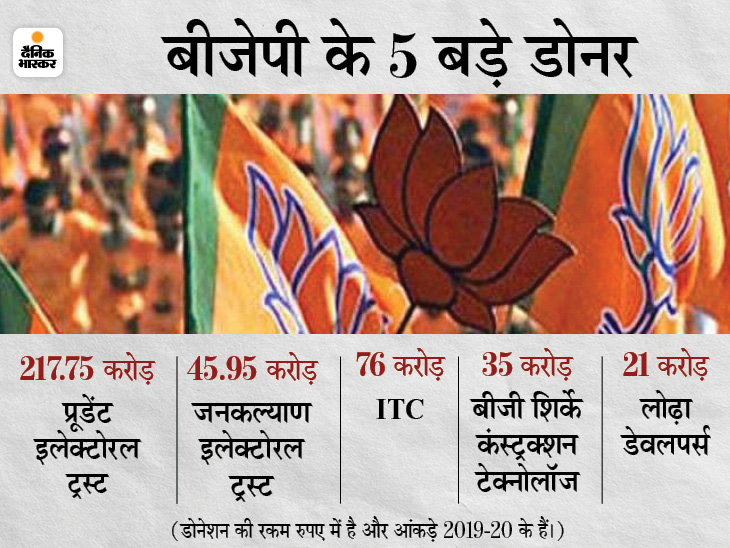 The BJP has been on the top for the 7th consecutive year in terms of getting donations from corporate and individual to political parties. In 2019-20, BJP got Rs 750 crore from donations. This amount is 5 times more than the donation received by the Congress (Rs 139 crore). At number three is Sharad Pawar’s NCP which got Rs 59 crore.

During this, CPM got 19.6 crores from donations while Mamata Banerjee’s Trinamool got 8 crores. At the same time, CPI had received donations of 1.9 crores. The English news website Indian Express has given this report.

An electoral trust is a company that receives funds from corporate houses for distribution among political parties. Through this, corporates giving donations to political parties can give money without revealing their identity. Bharti Enterprises, GMR Airport Developers and DLF make major donations to the Prudent Electoral Trust. The Jankalyan Electoral Trust gets money from JSW Group companies.

Mewar University gave maximum 2 crores among educational institutions
14 educational institutions are also included in the donation to BJP. Of these, Mewar University gave the maximum amount of Rs 2 crore. On the other hand, Allen Career Kota had given 25 lakh and Krishna Institute of Engineering 10 lakh. Similarly, Rs 2.5 lakh each was received from GD Goenka International School Surat and Pathania Public School Rohtak and Rs 21,000 from Little Heart Convent School Bhiwani.

Medical experts claim: Third wave of corona may come in October this year, danger will remain for next 1 year

Preparation for monsoon session from July: Om Birla said – 445 MPs got vaccinated, staff will be vaccinated from June 21

Sadhvi Pragya will make MPs do yoga: Bhopal MP will host a session on International Yoga Day, posters of the disappearance were put up...

Mukul - 24 December 2020
Delhi: Congress leaders along with Priyanka Gandhi wanted to march from Vijay Chowk to Rashtrapati Bhavan. Today is the 29th day of the farmers' agitation...
Go to mobile version