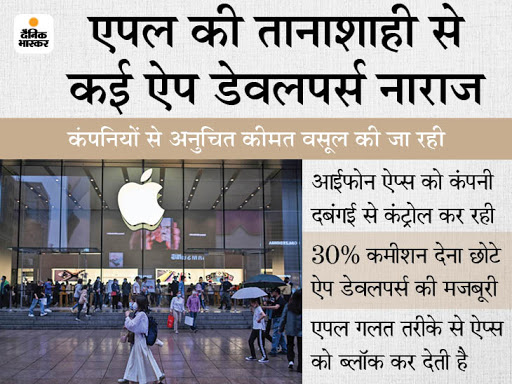 Apple’s Annual Worldwide Developers Conference has started on June 7. The entire focus of the company was on the software on the first day of the event. The iPhone will soon also work as a digital ID at US airports. The company has released a preview of iOS 15 for its developers. However, all is not well between Apple and the developers.

Some developers are angry with Apple’s dictatorship over iPhone apps. They complain that Apple is charging them and iPhone users unreasonable prices for many things. This is a controversy that needs to be understood.

Why are developers angry with Apple?
Some app makers and lawmakers say that Apple controls iPhone apps in a domineering way. Some are upset that Apple’s huge commission for membership in an online dating service or buying virtual gems in a Clash of Clans game has become a compulsion for them. Apple charges a commission of 30 percent on all apps on the iPhone. However, it has reduced the commission for best selling apps to 15% now. Apple’s app revenue has also been affected by this change. 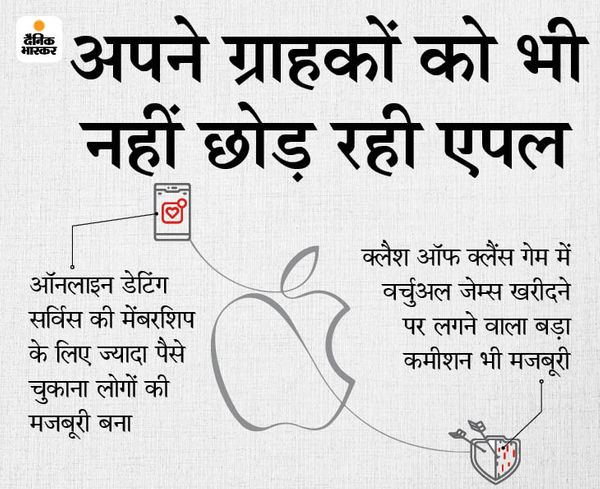 Some app developers believe that Apple unfairly blocks their apps, or causes them to be harmed by Apple’s competitor Internet service. Those complaining about Apple’s dictatorship are few among the million apps, but their complaints are justified. This includes Spotify, Match Group, Airbnb, Tile and Epic Games, the developer of the Fortnite video game.

What are the points of the complainants?
Apple has been running its App Store since 2008 with the same approach. People’s familiarity with apps makes it difficult for Apple to justify its restrictions and commissions. Like people can’t find apps without company help. Apple also increasingly makes Byzantine rules to control the App Store. They don’t always make sense. 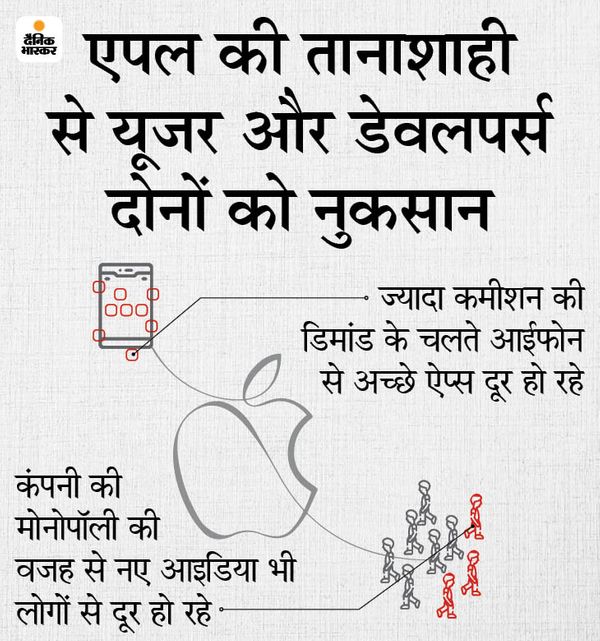 The big question, the complainants say, is that Apple’s grip on the iPhone sometimes turns away even good apps or new ideas from us because the developers who create them don’t come up to Apple’s monopoly, terms and high commissions.

Apple even a little right in some respects
The company says it deserves compensation for its role in the app economy. Apple brings millions of potential customers to the doorsteps of app makers. This makes it easier for people to buy goods. And it also screens apps to make sure they stay safe. What Apple does for app makers and others increases its price, but its contribution is meaningful.

What is the solution to the turmoil happening in the app?
Shira Ovid, a technology columnist for The New York Times, has two suggestions. One is mild and the other is aggressive. Apple should first stop blocking app makers who tell people that they don’t have to buy stuff in the app. For example, if you buy a YouTube Music streaming subscription in the iPhone app, it costs $12.99 (roughly Rs.950) a month. At the same time, if you buy it from the YouTube Music website, then it costs $ 9.99 (about Rs 720) a month. YouTube pays a commission of 3 dollars (about 220 rupees) to Apple, but its burden comes on the customer’s pocket. 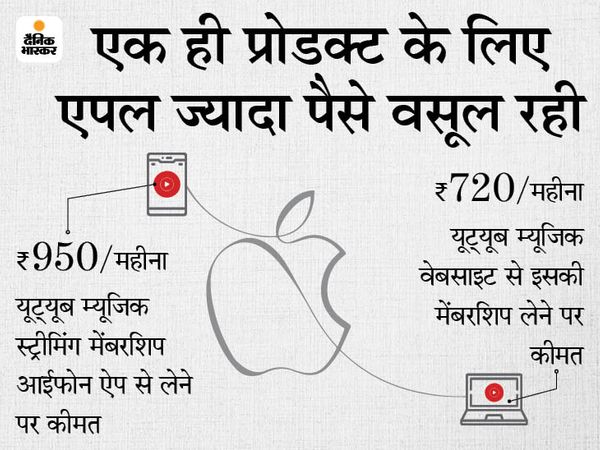 Ovid associate Greg Bensinger says – even if app makers are allowed to link to websites where people can buy subscriptions or digital goods for a low price, many people still wouldn’t. However, by doing this, Apple will get a good response from the customers.

The alternative app store should be completely destroyed. Finding, paying, and downloading apps from a single digital storefront is easier and arguably more secure, but I’m no longer sure it’s worth the higher cost and control by app store owners. What if we just downloaded the Tinder or YouTube Music app from companies’ websites?