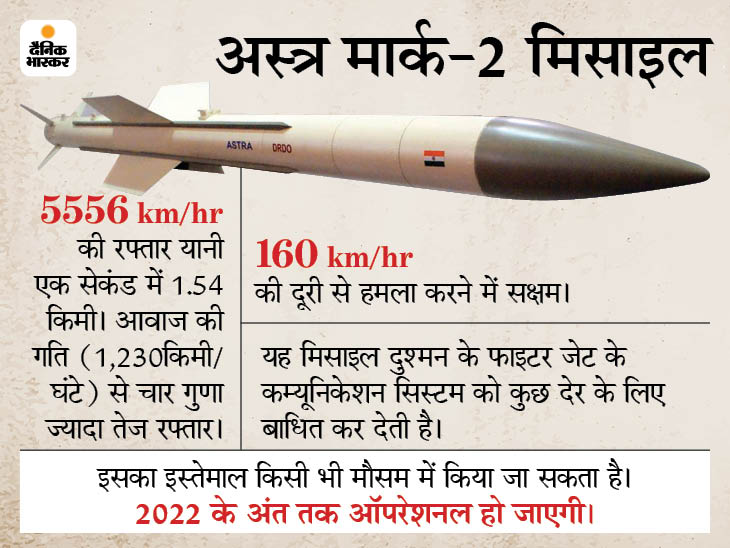 Between the twin challenges of neighboring China and Pakistan, India is building a missile that will not allow the enemy to recover with its speed and range. India is going to start the trial of the astral Mark-2 missile, the deadly air-to-air missile this year.

This missile can attack at a speed of 5556 km / h. Ie 1.54 km in a second. At the same time, it will be able to shoot down enemy aircraft from a range of 160 KM. After its formation, the US will join countries such as Russia, France and Israel.

Four times faster than the speed of voice
Former Central Air Commander Air Marshal SBP Sinha (Retd) said, the Astra Beyond Visual Range Air-to-Air Missile (BVRAAM) is four times faster than voice (1,230 km / h). Equipped with long range firepower, this missile will be capable of targeting enemy aircraft even beyond the visible range. It is expected that the next generation missile will become operational by the end of 2022.

Old version of weapon missile is such
The weapon missile, which can be used in any weather day and night, currently has a range of 100 km. Which is bought from Russia, France and Israel at an expensive price. The Indian Air Force and Navy have already placed orders for the 288 Astra Mark-1 missile. The old version of the missile, namely the Astra Mark-1, is being used by the Air Force in Sukhoi-30 MKI, MiG-29, MiG-29K, Mirage 2000 and Tejas MK1 / 1A.

84th day of Kisan agitation: Man among the agitators on the...