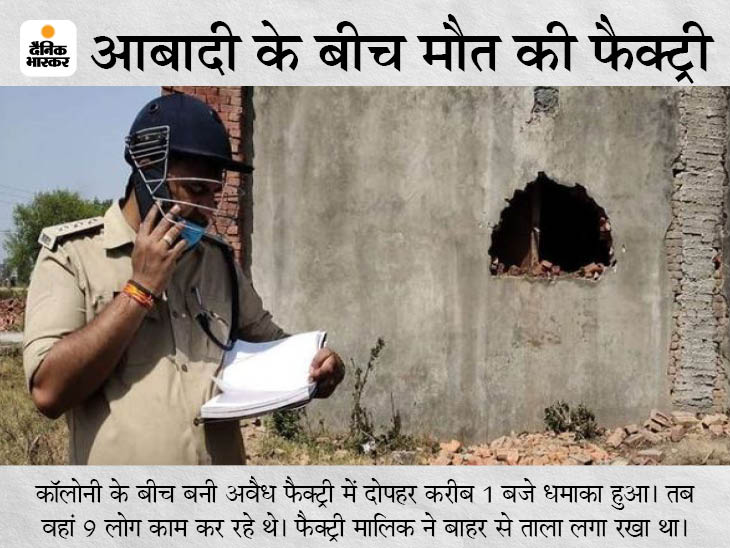 There was a sudden explosion on Thursday at the firecracker factory in Bakshiwala area of ​​Bijnor district in Uttar Pradesh. During the accident, 5 laborers working in the factory were killed, while 4 are in critical condition. The injured are undergoing treatment at the district hospital in Bijnor.

The blast occurred at the factory at around 1 pm, when 9 people were working there. It is feared that the gunpowder may have exploded due to the fire. At present, the police and administration are involved in the investigation of the entire case.

It is being told that the cracker factory is in the middle of the colony. Yusuf, a resident of Bukhara village in Bakshiwala area, has rented a house. In this, a factory for making firecrackers was running. A part of the house collapsed completely due to the explosion. When people from the vicinity reached the spot, they saw that 5 people working inside had died, while 4 people were seriously injured.

Factory was locked from outside
People told that Joseph was preparing fireworks from 9 laborers inside the house. During this time he kept a lock from outside the house. There is a possibility that the factory was operating illegally. On the other hand, Dr. Dharamvir Singh, SP of Bijnor on the information of the blast also reached the spot and took information about the case. He informed that Yusuf has been arrested. He has said to have a factory license.

Chief Minister asks for report from DM and SP
Chief Minister Yogi Adityanath expressed condolences to the families of the deceased after the accident reported. At the same time, senior officers have also been asked to help the victims in every possible way by staying on the spot. He has sought a report from the DM and SP on the entire matter.

Strict preparation in Kumbh: The number of saints and devotees in...

Mukul - 14 April 2021
Hindi newsNationalUttarakhand Government May Limit The Number Of Saints And Devotees For Kumbh Mela So That Crowd Can Be ControlledTroubled with Ads? Install...
Go to mobile version